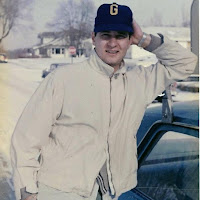 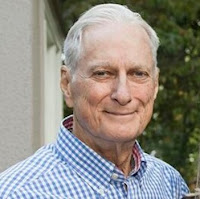 Yes, this is a departure from books. My dad passed away last month. He was a wonderful man and I want to post a tribute to him that will stay online. So here it is:

Gilbert George Geihs, native Nebraskan and long-time Oregonian, passed away on March 9, 2020 at the age of 80, after a short battle with AL amyloidosis.

Gil was born in Omaha, Nebraska, to Fritz and Dorothy Geihs, the middle of five siblings. He graduated from Central High School in 1957 and was still friends with many of his classmates more than 60 years later. He enjoyed his youth and told many hilarious tales about his childhood and high school years.

While attending the University of Nebraska at Omaha, Gil met Peggy Jean Herman, who caught his eye as the “Sweater Girl” of his Theta Chi fraternity. The two married during the Spring Break of their senior year in 1961 and remained married until his death. In 2011, they celebrated their 50th anniversary with a family reunion trip to the Bavarian village where Gilbert’s father Fritz was born and his family still owned a mountain inn. Gilbert was as close with his relatives in Germany as he was with his family in America.

After college, Gil and his best friend joined the U.S. Coast Guard, which was a big adventure to two young men from Nebraska. They served six months active duty and Gil got a lifetime of funny stories out of the experience.

Gil had a long career in real estate. In 1975, he started Progress West Corp., a successful commercial real estate company in Omaha. In 1981, looking for a milder climate, Gil and Peggy moved with their family to Portland, Oregon. Gil managed the commercial real estate holdings of Willamette Savings & Loan until it was dissolved in 1990. His most unusual job as a realtor was overseeing the auction of all the artwork from the bank’s branches and offices. After Willamette closed, Gil worked in commercial property management at Norris & Stevens in Portland until he retired in 2005.

Gil’s two daughters Gilion and Tennison were born in 1966 and 1968. He also took into his home Sina Mansouri, a foster daughter from Afghanistan, who lived with the family from age 14 until college. No daughters could ask for a kinder or funnier dad. He built them a backyard playhouse, a lemonade “store,” and the world’s most dangerous go cart. He won over their friends when he built a dune buggy from a VW Bug. When they were in high school and college, he let the girls and their friends have parties in his house, which made him quite popular. Gil remained close with all three daughters throughout their lives and Gilion and Tennison were with him when he passed away.

With his love of story telling and for explaining things, Gil was always popular with kids and young adults, many who now consider him to have been a mentor or father figure to them. Whether opening his home for a place to stay, finding a job, or diagramming a plan on the back of a napkin, Gil always made an effort for the young people in his life.

Visiting and reminiscing with family and friends were Gil’s favorite pastimes. He was a consummate storyteller and made everyone laugh with his quick wit and jovial humor. It seems like he always had a smile on his face and a sparkle in his eye. Gil and Peggy enjoyed many trips with friends or often to visit Bavarian relatives. The best trips were the ones with their daughters, like a trip to Austria and Italy last summer to celebrate Gilbert and Peggy’s 80th birthdays.

Gilbert is survived by his wife Peggy, daughters Gilion Dumas (husband, James) and Tennison Geihs, first cousin once removed Georg Geiss whom he considered a son, second cousin once removed Friederike Baliamis whom he considered a daughter, brother Paul, sisters Judy Douglas and Dorothy Stevens, uncle David Getzschman whom he considered another brother, and many nephews, nieces, cousins, and other family members. He was predeceased by his father and mother, foster daughter Sina Mansouri, brother Fred, brother-in-law Robert Douglas, and his favorite little doggies Frances, Stella, and Minnie.

Memorial services will be held in Omaha and Portland at a future date.

Posted by Gilion at Rose City Reader at 12:00 PM 4 comments