Review of the Day: 7 Wheelchairs 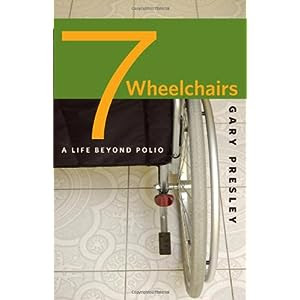 Do not describe Gary Presley as confined to a wheelchair! Nothing raises the hackles on this feisty author faster than this unthinking comment, no matter how benignly intended. To Presley, each of his seven wheelchairs has meant independence and self-reliance in a life otherwise dependent on others for mobility. His wheelchairs have been the opposite of confining; they are his ticket to freedom.

In 7 Wheelchairs: A Life Beyond Polio, Presley describes his life after polio left him permanently paralyzed. He tells what it was to be a 17-year-old boy who walked out of basketball practice with a headache only to wake up in an iron lung, never to walk again.

This is not a book about polio victims, people who use wheelchairs, or the general experiences of disabled people before the Americans with Disabilities Act was passed. This is the story of one man who learned very slowly how to live a life he never considered would be his. It is the story of the “riding lessons” Presley learned by rolling through the decades in his seven wheelchairs. As he explains:


[A]fter I had ridden through three decades in a wheelchair, I began writing about life as a person with a disability. I didn’t write, really, to complain or to change things. I wrote because I found myself unsure of my place in the world, and I wanted to explore my boundaries.

This book is the culmination of that exploration so far. The first half of Presley’s memoir is generally chronological, setting out his story from the ill-fated polio vaccine that left him a “crip,” through wasted years of depression, to the happenstance that resulted in his long-time insurance career. The second half gets off a strict chronological path, filling in the details of Presley’s life after his parents’ deaths through observations and discussions of various aspects of his life, including his marriage and religious development. The first part of the book packs the most wallop, only because Presley makes so real the confusion and despair of sudden disability in a time when America was on the cusp between “warehousing” its “invalids” and trying to integrate people with disabilities into mainstream life.

He does not spend much time on his early, pre-polio childhood, merely explaining that his family settled on a small Missouri farm when his father retired from the military. Bucolic Missouri seemed particularly sleepy after a nomadic life spent moving from base to base. Little did Presley expect he would stay there, dependent on his parents’ care until they passed away. He recognized that caring for a disabled adult son was also not how his parents had planned to spend their golden years. Presley’s examination of the way his own anger and self-pity blinded him to his parents' emotional needs, and how he now lives with guilt thinking of those years, cuts to the bone.

Equally thought-provoking is Presley’s consideration of the psychological effects his disability has on himself and his loved ones. From today's viewpoint, when counseling is much more common, accepted, and expected—especially as part of treatment for a traumatizing event—it is hard to even comprehend how he and his family dealt alone with the emotional and mental side of his condition. At a time when Presley and his family needed guidance most, he was sent home after three months in an iron lung and six months of recuperation and physical therapy, having only visited a “mind doctor” two times, including once just to determine if he was intelligent enough to use his new equipment. He wished his doctors at the rehabilitation center had asked him, "What would you like to do with your life? How do you plan on earning a living?" Or, "Better said, I wish I had known the question needed to be asked." Instead, he was left to come to grips with his situation on his own; professional guidance and an "outside perspective" were not available and went against his family’s nature. Reading of his decades-long struggle with self-pity, anger, guilt, and depression—all without the benefit of professional counseling or psychotherapeutic drugs—only offers a shadow of the frustration Presley must have lived with.

In the second half of the book, Presley tells how his years of struggle left him a “burnt out case,” self-nicknamed “Gimp.” He describes his love affair and marriage with Belinda, a woman 20 years his junior and mother of two sons. He discusses his conversion to Catholicism. But in general, this part of the book is more emotional and abstract, as Presley tries to pull different threads together. It is apparent here that this book began as a collection of essays, as the narrative flow is a little crooked. There is less attempt at straight-forward biography and a more rough and tumble expression of true feelings, some of which are as confusing and difficult for the reader to grapple with as for the writer. For instance, Presley makes it clear that he does not want to be defined by his wheelchair, but ignores the obvious irony that he only wrote, and we only read, this book because of his experience with polio and wheelchairs. Also, when Presley disdains all pity because it “objectifies, dehumanizes, and degenerates,” yet recognizes that “it’s all so damned confusing, that murky line between compassion and pity, sympathy and condescension,” the reader is left to wonder just what one is supposed to feel when reading Presley's story.

Finally, Presley's candid acknowledgement that he lives always with “[i]ncoherent, unjustified, unearned rage; putrid rage, mostly buried, mostly festering into guilt” that runs inside him “like a stream of molten lava,” makes it absolutely clear that this is no warm and cuddly, feel-good memoir. In the end, these difficult passages are the real appeal of his story, if not in the immediate reading then in the later pondering.

Presley’s book is as ambiguous, frustrating, and inconsistent as real life, with all of life’s rough edges and raw patches. It is not a guide to understanding “the disabled” as a group; it is a glimpse of the world through one man’s eyes. It is intensely personal story, and all the more powerful for it.

Posted by Gilion at Rose City Reader at 3:08 PM 2 comments