Review: The Spirit of the Place 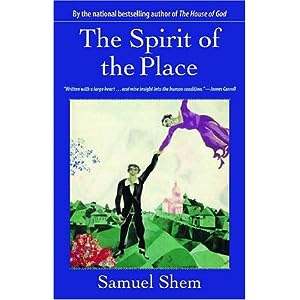 Samuel Shem is famous for his 1978 best seller, House of God – a humorous expose of hospital intern life and still a “must read” for many medical students. His latest novel, The Spirit of the Place, is also about the practice of medicine, but this time leaves the hospital for solo practice in the small Hudson River town of Columbia, New York.

Nominally, the hero is Dr. Orville Rose, whose mother’s death brings him back to Columbia from Europe, where he was in the middle of a divorce-triggered mid-life crisis centered on an affair with an Italian yoga instructor. Strong-armed by the terms of his mother’s will, Orville must live in her house and practice medicine in Columbia for a year and 13 days if he is to inherit her fortune.

But the town of Columbia is really the main character. A rocky escarpment flanked by swamps, shouldering an inexplicable (as it was once a freshwater port) whaling theme, Columbia has seen better days. The town and it citizens are now burdened with every problem imaginable, from industrial pollutants and gang violence, to a gonorrhea epidemic and chronic obesity. On top of it all, Columbia has a well-earned reputation for “breakage” – anything the town does goes wrong, including parade floats and city council slide shows.

Orville’s battle with Columbia is the central conflict in the story, but he is in conflict with everyone and everything. He cannot seem to get along with his ex-wife, his Italian lover, his new Columbian girlfriend, his sister, his brother-in-law, his neighbor, himself, or even his dead mother who keeps appearing to him for conversations as well as sending him posthumous letters. All of this makes for a compelling plot with plenty of interesting side stories and the obligatory cast of colorful locals.

Shem gets an A- for conceptualization.[1] But he deserves a C- for execution. Quirks in his writing style prove so distracting that it is hard to get into the flow of the story. First, there is the jarring dichotomy between the medical storyline and the personal. Shem is at his best when writing about medicine, especially in describing the bone-wearying monotony of injury, violence, illness, and death that fills a 36-hour shift in a small town emergency room. But his hard boiled prose and gallows humor (Orville calls to say he will be late for dinner because everyone is dying, they’re just not doing it fast enough) contrasts jarringly with the fluffy soft New Age drivel in the personal scenes, such as this particularly saccharine passage:


Miranda leaned against the doorjamb. Seeing this man she loved make the move towards fathering, she felt her heart lighten, lift, her whole being lift so it seemed she had to hold on to the door to stay down on the ground. Her face flushed, her eyes teared up, her heart opened like a new tulip.

What is worse – the use of “father” as a verb? Or, “her heart opened like a new tulip”?

Also distracting is Shem’s use of multiple perspectives. The story is told in third person, mostly from Orville’s perspective. But some of the scenes with girlfriend Miranda are written from her perspective. Worse, Shem sometimes switches perspective between the two within the same scene, or even the same conversation.

Finally, Shem’s humor can get tryingly cheeky – proving the rule that it is very hard to write a funny book. Shem always goes for one too many laughs, pushing the joke too far: too many quirky villagers, too many funny business names, too many small town silly juxtapositions. Some jokes, like the ménage à trios involving the flamboyantly gay amateur theater director, a bitter divorcee, and a rent-a-clown are just too cute by half.

Overall, The Spirit of the Place simply does not live up to its potential.


[1] Many readers may knock down his grade for conceptualization for setting the story in 1983/84. There is nothing about the story that requires the mid-1980s setting. It takes a while to figure out that the story is not set contemporaneously, and it is distracting to try to figure out why. There is no apparent reason, other then Shem’s obviously urgent need to criticize Ronald Reagan, which he does in several passages. While gratuitous Reagan bashing may warm the cockles for some readers, others will be put off by this display of the author’s personal anger a quarter of a century after the fact.>

OTHER REVIEWS
If you would like your review of this book listed here, please leave a comment with a link and I will add it.

Posted by Gilion at Rose City Reader at 12:05 PM 0 comments