The Radical Potter: The Life and Times of Josiah Wedgwood by Tristram Hunt -- BOOK REVIEW 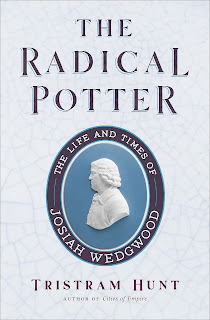 The Radical Potter: The Life and Times of Josiah Wedgwood by Tristram Hunt (2021, Metropolitan Books)

You probably recognize the iconic chalky blue background with white frosting decorations of Wedgwood’s most famous pottery. But who knew that Josiah Wedgwood himself was an iconoclast of 18th Century marketing and manufacture? In Tristram Hunt’s new biography, The Radical Potter, he looks deep into The Life and Times of Josiah Wedgwood and it is a fascinating story.

The 1700s was an exciting era for ideas and industry and Wedgwood was in the center of both. He was a leader of the Industrial Revolution, advocating a system of canals for shipping and using advances in chemistry to grow his small, artisan pottery business into the first major English pottery factory. He was a marketing innovator, introducing ideas such as direct mail and illustrated catalogues, money back guarantees, and promotions like free delivery and buy one get one free. Hunt also explores how Wedgwood’s business advancements fit with the economic and political ideas of the times, particularly the ideas of Adam Smith and David Hume.

Probably the most interesting chapter in the book is the one titled “The Subject of Freedom” in which Hunt examines Wedgwood’s support of the American Revolution, the influence of the French Revolution on his thinking, and his strong stance in favor of the abolition of slavery. His factory mass-produced and distributed an anti-slavery medallion with the slogan, “Am I Not a Man and a Brother?” that brought great awareness to the abolitionist cause in Britain and America.

Hunt relies on Wedgwood archive materials, including business records and correspondence, to tell the story of Josiah Wedgwood. For readers with an interest in the Industrial Revolution or the history of pottery, The Radical Potter is a must-read biography of the man who profoundly changed how we work and live.

Author Tristram Hunt is a historian and the director of the Victoria and Albert Museum. His “Epilogue” in The Radical Potter covers the sad decline of the Wedgwood company in the 21st Century and the faint glimmer of hope for the future.

I got my ARC copy of The Radical Potter from the Early Reviewer program at LibraryThing.