Shoot the Moonlight Out by William Boyle -- BOOK REVIEW 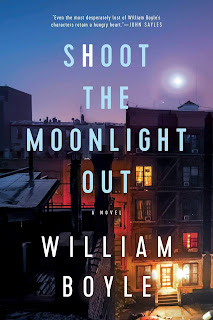 Shoot the Moonlight Out by William Boyle (2021, Pegasus Books)

Shoot the Moonlight Out, the new neo noir thriller by William Boyle, starts in 1996 with two friends being stupid kids. Bobby and his friend Zeke think throwing rocks at cars on the Parkway is just a silly game until the inevitable tragedy brings an end to the fun. Fast forward to the summer of 2001. Bobby is now out of high school, dragging this soul-poisoning secret around with him, and working for a second-rate con man running a Ponzi scheme.

Destined to cross Bobby’s path is Jack, a seemingly mild-mannered widow raising his teen-aged daughter. But Jack also has a secret. He is a vigilante on the side, avenging neighborhood wrongs, and he is out to get Bobby’s boss.

There’s a locker stuffed with cash, Bobby is in love and wants out of his life of two-bit crime, Jack’s taking a writing class from Bobby’s former stepsister, and a lot more is going on. Multiple characters orbit and crisscross. While Boyle gives them individual personalities, they all are shady, shabby, or broken in some way. The book is dense with plot and characters.

The setting is as much a character as any of the people in the book. It’s south Brooklyn the day before yesterday, so there is a grey haze of gritty nostalgia over the whole thing. It’s clear that Boyle knows south Brooklyn down to the last crack in the sidewalk and he brings it to life for the reader.
All in all, Shoot the Moonlight Out is a gripping, character-driven crime novel, perfect for fans of urban noir.

NOTES
Here is an excerpt from another review I thought summed up Boyle's book quite well:

William Boyle knows how to craft a tight quilt of a plot while at the same time grounding that plot in a setting of wonderful richness. His Brooklyn is specific and clear and alive, a place he knows cold. He’s able to capture the messiness of life with the acuity of a dedicated realist, but he shapes that messiness in such a way that he keeps everything moving forward and toward a definitive resolution. Controlled and yet loose is how I would describe Shoot the Moonlight Out, and for my money, that’s a blend of two traits that’s no small achievement. [Shoot the Moonlight Out] is a novel that rings true down to the tiniest detail.