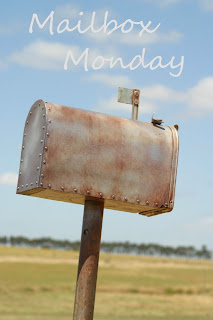 I've been Mailbox Monday MIA for a few weeks while getting ready for a trial. In the meantime, several new books have come my way and stacked up on my desk. What do you think of these new releases? Does anything catch your eye?

What new books came into your house lately?

I Have Not Loved You with My Whole Heart by Cris Harris (OSU Press). This gripping memoir came out in June and I can't wait to read it.
Cris Harris grew up in a difficult household with an alcoholic father, learning to live with the uncertainty, chaos, and neglect of living with addiction. What he didn't expect was that his father, an Episcopalian priest, would come out as gay during the height of the AIDS crisis and die of HIV in 1995.

The Image: A Novel in Pieces by Steven Faulkner (Beaufort Books). This short novel launches today!
The Image is the tale of a timeless work of art told in three linked stories. It's a story of how art and faith are often entwined and what it takes to cherish both.

Darrow's Nightmare: The Forgotten Story of America's Most Famous Trial Lawyer: (Los Angeles 1911-1913) by Nelson Johnson (Rosetta Books). This one came out in April. Nelson Johnson wrote Boardwalk Empire that was made into such a terrific TV show.
Darrow's Nightmare is the nonfiction account of how America's most famous criminal trial attorney was almost a convicted criminal himself. in 1911, Darrow went to Los Angeles to defend two union agitators on trial for mass murder. While there, he was indicted and tried for bribing a juror. A conviction would have ended his career.

Plume Poetry 9, edited by Daniel Lawless. Plume is an online magazine dedicated to publishing the best of contemporary poetry. Since 2012, Plume has published an annual anthology of new poems.
In this 9th anthology, editor Daniel Lawless did something a little different. Instead of choosing all the poems himself, he chose 49 poems and then let those poets chose another poet to be paired with. The 49 poem pairings appear side-by-side, in dialog, as they say in artsy circles. There is also a selection of nine poems by and an interview with Diane Seuss.

Mailbox Monday is hosted by Serena of Savvy Verse & Wit, Martha of Reviews by Martha's Bookshelf, and Velvet of vvb32reads.


Posted by Gilion at Rose City Reader at 9:00 AM 12 comments