Irene Butter, Author of Shores Beyond Shores: From Holocaust to Hope, My True Story - AUTHOR INTERVIEW 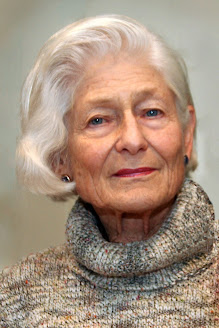 Irene Butter was Anne Frank's neighbor in Amsterdam before her family was shipped to a concentration camp. In her new memoir, Shores Beyond Shores: From Holocaust to Hope, My True Story, Butter makes public a story she did not share to a large audience for decades. 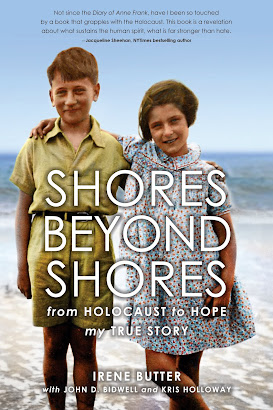 Irene Butter talked with Rose City Reader about her book and what we learn from Holocaust stories:

It was decades after the Holocaust that you first told your story. Why did you not talk about your experience earlier and how did you begin to talk about it?

Several reasons:  First of all for quite a few years people were not willing/able to listen to Holocaust survivors. I focused on building a new life which was very demanding;

Education, career and family.  I was unaware of the importance of telling stories about the Holocaust until I listened to Elie Wiesel: “ If you were in the camps, if you smelled the air and heard the silence of the dead, it is  your duty to provide testimony to be a witness so that the victims do not die twice.”

How did you come to write Shores Beyond Shores?

After telling my story to students in Middle Schools, High Schools, Colleges and other for more than 35 years, and received such remarkably insightful feedback I decided to write my memoir which students can read after I am no longer able to visit schools.

Your memoir is an intensely personal account of your family’s survival of the Holocaust. Was it difficult to tell such an intimate story in a book?

It was far from easy. It took five years with a number of breaks and if it were not for my co-writers and dear friends, Kris Holloway and John Bidwell, the book might never have been completed.

Who is your intended audience and what do you hope your readers will gain from your memoir?

My main target audience is young people , who are still trying to find their identity, what kind of a person they want to be and what they want to accomplish in their lives. I encourage them to help build a better world,  to fight for equality, equity and justice for all.  My hope is that these young people will help to stamp out hatred and refuse to be enemies.

Can you recommend any other books about the Holocaust?  Are there personal accounts like yours?

There are numerous Holocaust memoirs, many different perspectives, and each one is unique.

People should become aware that we are all human beings, regardless of race, color, religion, ethnicity, sexuality etc. and that all of us deserve the same basic human rights, and that when we open ourselves to "the other" we discover that our differences are far less significant than all we have in common. We need to respect and protect each other.

Do you think it is important to keep Holocaust memory alive and, if so, why?

Yes I do. The Holocaust was an era of the most massive, most brutal, most comprehensive assault on humanity, encompassing a whole continent. Unfortunately the world has not learned the lessons offered by the Holocaust.

By focusing on young people we hope that History will stop repeating itself.

In addition to writing your memoir, are you otherwise involved in other work with Holocaust survivors?

I have been a member of several survivor groups.  Sadly the numbers are dwindling.

It means a lot to  me to be  part of a group of children of survivors who tell their stories at a Temple I belong to, this group is often known as Second Generation.

I continue to tell my story (now on Zoom) to classes, libraries, museums, and aspire to have my memoir translated into other languages to make it more accessible to more people. It has just been translated into Dutch and launched in The Netherlands in June of this year. The Portuguese edition launched this past month. It will be out in the Czech Republic by the end of the year and in German at the end of 2021. Prior to these foreign language editions it was published in the UK in November of 2019.

I would hope that teachers, librarians, and members of bookclubs will be interested to invite me for a talk with middle grade or high school students or anyone interested in the Holocaust and World War II. Links to past talks can be found on my website.

SHORES BEYOND SHORES IS AVAILABLE ONLINE IN PAPERBACK AND EBOOK.