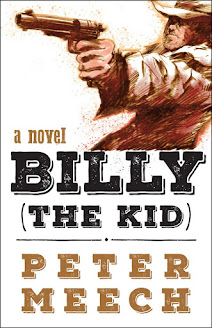 Billy (the Kid) by Peter Meech (2020)
What if Sheriff Pat Garrett hadn't shot and killed William Bonney in 1881? What if Billy the Kid survived, escaped, and rode off into the sunset? Well, then he might have become a dentist and retired in Pueblo, Colorado in 1932. That's the beguiling premise of Peter Meech's new novel Billy (the Kid). Meech's alternate history finds an older, contemplative Billy living in a boarding house in the sleepy backwater of Pueblo. Sleepy that is until rival bootleggers move in to open a second speakeasy, threatening the livelihood – and lives – of Billy's friends.
The book has the loping pace and recognizable icons of a classic western – saloons, dusty streets, good guys and bad guys, guns, and horseback riding. And of course there's a pretty lady that Billy has his eye on. But 1932 is the twilight of the Wild West. The New West has arrived. Instead of outlaws on horses robbing banks, young gangsters drive cars and run rum. Billy is a part of but out of place in this New West, so a feeling of nostalgia hovers over the story.
This feeling plays out through Billy's interactions with the other characters. There is a lot of reminiscing with former Rough Riders, delivering life lessons to a young protégé, and jawboning with buddies at the Spit 'n' Argue club. Some of these scenes move the plot, others are set pieces. All of them make the story a delight. The main relationship that develops is Billy's with Grace O'Bannion, the widow of the former sheriff. Her character and the bond that grows between them adds dimension to the story and gives it a satisfying arc.
The story is told in the third person, from Billy's point of view, augmented by lots of dialog. Even in the third person, Billy is an unreliable narrator. It is never clear whether he is Billy the Kid, writing his memoirs and avoiding trouble, or a fantasist and historian, writing a biography of the famous gunslinger and collecting memorabilia. The ambiguity enhances the charm of the story.
Billy (the Kid) was my favorite summer read of 2020. I'd recommend it to anyone looking for an imaginative story to get lost in.
NOTES
Read my Rose City Reader interview of author Peter Meech here.