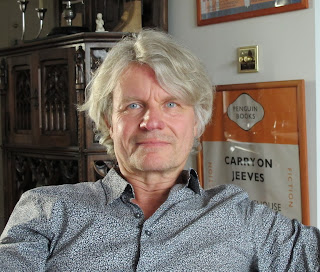 Author Paul Kent is a long-serving member of the P. G. Wodehouse Society and lifelong Wodehouse fan. Based on unprecedented access to Wodehouse's papers and library, Kent is working on a three-volume study of Wodehouse's writing career. Pelham Grenville Wodehouse, Volume 1, This is jolly old Fame, is out now. It is a must read for all Wodehouse enthusiasts. 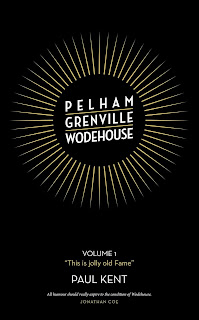 
There are plenty of P. G. Wodehouse fans, but please give us a thumbnail introduction for new readers.

Wodehouse is simply the funniest English comic writer of the 20th century. In a long and productive life, he wrote over 100 books, of which the best known are the Jeeves & Wooster series, which has been adapted for TV on numerous occasions, concerning a well-meaning but not particularly intelligent young chap and his omniscient valet, who extracts him from all kinds of ridiculous scrapes. There’s also the Blandings series, which focuses on a dotty English early and his love for his prize-winning, gigantic pig. As well as these headliners, there are several sub-series and dozens of one-off novels and stories. Without exception, they’ll bring a smile to your face. If they don’t, you’re probably dead already.

What is your background and how did it lead you to write your three-volumes on the life and works of Wodehouse?

I was a BBC radio producer, specializing in music and drama performances. I had first encountered Wodehouse at the age of 12, but carried this love over into my professional life, during which I commissioned and produced numerous BBC readings and dramatizations. Now semi-retired, I have the time to write the book(s) I’ve always wanted to write about him.

How are the three volumes organized?

Volume 1: This is jolly old Fame focuses on the development of Wodehouse’s unique writing style. He has been praised by everyone from Stephen Fry to Queen Elizabeth for his immaculate use of English, which is erudite, funny, and a joy to read. Volume 2 is a tour of "Wodehouse World" – the micro-universe he created with his many characters; and Volume 3 looks at how his work has survived through time. Wodehouse is still as popular as he ever was, even though some of his books are over a century old – and I investigate why that is.

There are other biographies of Wodehouse. What distinguishes yours from the others?

For a start, it’s not a biography! It’s the first full-length study of how Plum’s writing developed over his long writing life, and how the ideas in his head made it onto the page. Oddly, this has never been attempted before in any great depth, and the reviewers of Volume 1 – many of them seasoned Wodehouseans – seem to have found it a rewarding approach.

What is the origin of the subtitle, This is jolly old Fame?

Good question! It’s from a letter Wodehouse wrote to his stepdaughter Leonora just as he was breaking big in 1922: "In a review of a book in the Times, they say 'The author at times reverts to the P.G. Wodehouse manner.' This, I need scarcely point out to you, is jolly old Fame. Once they begin to refer to you in that casual way as if everybody must know who you are all is well."

What did you learn from writing your biography that most surprised you, either about Wodehouse or his work?

Just how industrious he was. He spent most of his waking hours writing from 1900 to his death in 1975. He even died in hospital with his pen in his hand and notes for his new novel and some song lyrics at his bedside.

What is you favorite Wodehouse book?

You’re not making this easy! I guess it’s the one that turned me on to Wodehouse at the age of 12 which was loaned to me by a school friend – Psmith in the City. Almost 50 years later, I still love it.

For readers new to Wodehouse, which books do you suggest they read first?

Without doubt, The Code of the Woosters, featuring Jeeves and Bertie. It seems to top most of the polls, and is so beautifully orchestrated it resembles a stage farce on acid. Nobody but Wodehouse could have written it – you can only read a few pages at a time, it’s so relentlessly funny. An ideal antidote to modern life.

When will Volumes 2 and 3 of your Wodehouse trilogy be available?

Volume 1 has already been published, Volume 2 will emerge in Fall 2020 (coronavirus permitting), and Volume 3 is being prepared.

Volume 3! But there’s still so much material, that might not be the end . . .

PELHAM GRENVILLE WODEHOUSE, VOLUME 1, THIS IS JOLLY OLD FAME IS AVAILABLE ONLINE IN E-BOOK AND HARDBACK.