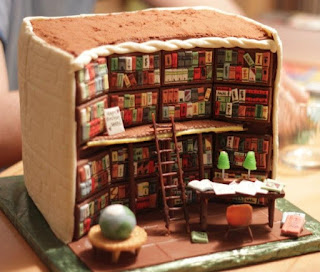 It's my 12th blogiversary! I started Rose City Reader on March 20, 2008, and have been blogging along here for 12 years as of today. A dozen years of book blogging feels like a long time. I'd like to celebrate with a library cake like the one in the picture.

I started this blog to keep track of the book lists I love: Prize Winners, Must Reads, and a few of my own creation. The Modern Library's list of Top 100 Novels of the 20th Century got me hooked on book lists in 1999. By 2008, I had finished the 121 books on the Modern Library list (there are more than 100 because trilogies, quartets, and even a 12-volume series are counted as one book). I was inspired to tackle other lists, starting with knockoffs like Radcliffe's Top 100 Novels of the 20th Century and Erica Jong's list of Top 100 20th Century Novels by Women.

Soon I had too many lists going and needed an organized way to keep track of them. Google kept telling me to "click here" to start a blog so I tried it and 15 minutes later I had Rose City Reader. It was easier to start this blog than to set up an Excel spreadsheet.

Twelve years later, I'm working on 29 books lists and 43 bibliographies of favorite authors. I don't know if I will finish them all. In fact, I know there are books on some of the lists that I won't read. But I still have fun playing with my lists.

More than the lists, I use Rose City Reader to post about the books I'm reading, books that catch my eye, and author interviews. I used to post more reviews and hope to get back to reviewing more when I retire from my Dumas & Vaughn law practice. The author interview posts are my favorite because I love learning more about what goes into creating a book and how authors work and think.

Enormous thanks to everyone who reads Rose City Reader! Thank you for 12 years of blogging fun and please stick around!

Posted by Gilion at Rose City Reader at 9:00 AM 7 comments