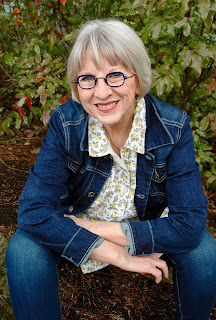 Judy Nedry's latest book is a moody mystery set in the Columbia River Gorge of the Pacific Northwest. Blackthorn is a stand alone books, a break from Nedry's Emma Golden series.

Judy recently talked with Rose City Reader about her new book and other pursuits, including an event this weekend for those in the Portland area:

You describe your new book Blackthorn as a “gothic thriller.” What do you mean?

A lonely, damaged young woman in a great house (in this case, a derelict hotel and barely functioning spa). There is the mystery of her dead brother, sinister goings on, the question of who to trust, and an aura of general creepiness. I was inspired by classic gothics like Jane Eyre and Wuthering Heights, Daphne du Maurier’s Jamaica Inn and Stephen King’s The Shining, as well as many other elements from du Maurier’s legacy of wonderful mysteries including Rebecca and My Cousin Rachel.

What part does the Columbia River Gorge setting play in your story?

I had to write a story set in the Columbia River Gorge. I’ve known that for 40 years. To me, the Gorge is a place that is beyond beautiful, as well as mystical and moody. It’s sacred ground, with Indian fishing villages covered by The Dalles Dam and others, Indian legends of the creation of Wy’east (Mt. Hood) and the other mountains surrounding it. It is such a rich location on so many levels that I find it irresistible.

Blackthorn is a break from your Emma Golden mystery series. Why the break and will we see Emma again?

Emma will return, chastened and a little wiser, in Book #4. The break from the series occurred because I finally had enough ammunition to write Blackthorn, both in terms of research and writing skill. I have always wanted to write a gothic. This was a huge departure for me, and I feel happy with the result.

What did you learn from writing this stand alone mystery – either about the subject of the book or the writing process – that most surprised you?

I was surprised at how I was able to dredge up memories from my own life—rodeos, salting the birds’ tails, building forts in the woods, stuff of the senses—and apply them in meaningful ways in the story. They came to me almost effortlessly and contributed layers to Sage’s character. I was surprised that I loved writing in third person. I’ll definitely do that again, which means there will be more stand alones. I learned that Sage’s story doesn’t need to continue. I am very satisfied with where I left her in her life. And I love writing a series because I enjoy reading them.

I begin my novels with a vague idea of an ending. I know who dunnit, and that helps me stay focused and build the story to its end. However, the specifics of endings are elusive, and they are something I have struggled with in all my books. I write up to the ending, then mess around and get myself all worked up about HOW TO FINISH THE DAMN BOOK. It takes weeks sometimes. Fortunately, during that time, there is plenty to do. I’m rewriting and further developing what I’ve already written to that point, working on design issues, and all the other stuff an indie writer has to deal with. Then, finally, resolution! The ending is always the very last thing.

Daphne du Maurier was one of my all-time favorites. I read everything she’s written at least twice, and reread Jamaica Inn as I was writing Blackthorn. She is with me in everything I write. Stephen King is a great storyteller. I read all his early books and short story collections and listened to It last summer. Every writer can learn just from listening to the way King builds scenes, how every detail is thought of to wring the most drama out of a situation, how the dialog works, how all his characters stay in character.

Winston Graham (Marnie, The Poldark Series) was a huge inspiration. P.D. James was a master of setting and psychology and great mysteries. Elizabeth George’s Lynley series for setting and psychology. Plus her Sgt. Barbara Havers is one of the great creations of crime fiction, and always ALWAYS is good for a long, hard laugh. Tana French—everything she’s written to date. These writers deliver literary fiction as well as fine mysteries. I loved Sue Grafton and like to think of Emma Golden as an older version of Kinsey Milhone. New-to-me mystery writers like Jane Harper, Candice Fox, and Attica Locke have been exciting discoveries.

Charcoal Joe by Walter Mosley, another of my favorite mystery writers.

You are also doing Oregon theater reviews. Tell us about that project.

I started writing play reviews to stay sane. I wrote some for my blog, then pitched them to local theatres. It’s a love affair that began in my freshman year in college when I volunteered at the Whitman College drama department. I love being around people who are a bit edgy, so these folks feel like my tribe. Courage, talent, quirkiness, creativity, and CRAZY HARD WORK—and then, showtime. It’s magic. For me, it’s a break from fiction, a discipline, and fun.

They are all very important. An author must have a website. The one I have now allows access to my blogs, excerpts from all the novels, and a resource for purchasing signed copies of all my books, plus play reviews, and upcoming events. Facebook and twitter are fun, interactive, and a fantastic way to get the word out on short notice. A few years ago these tools didn’t exist!

I will be at the Oregon City Festival of the Arts on August 10 from 10 a.m.-1 p.m. with all of my books. I’m part of the Northwest Independent Writers Association and will be manning their booth. It’s a great place for people to meet and visit with writers in a number of genres, so come on out. Also, on Tuesday, October 15, I will give a book talk at the Lake Oswego Public Library at 7 p.m. More to come: check my website.

I just finished five days of research in Central Oregon for a new mystery. Haven’t decided if it will be Emma #5 or a stand alone. Emma #4 is alive and well in my brain, but no words to paper yet. The ideas are marinating. It’s been a pretty intense six months due to a number of things—not the least of which launching and marketing a new book—so the plan is to regroup during the Dog Days of August and then hit the ground running in September.

BLACKTHORN IS AVAILABLE ONLINE OR ASK YOUR LOCAL BOOK SELLER TO ORDER IT!