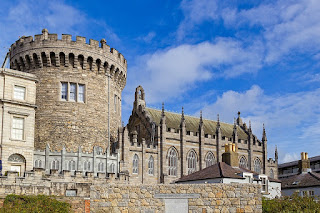 Tana French is an American-born author who lives and writes in Ireland. Her popular Dublin Murder Squad series switches protagonists from book to book, with one of the side characters in an earlier book moving forward into the leading role in a later book. Her latest is a stand alone.

In the books, the Murder Squad office is in the Dublin Castle. In real life, homicide detectives in Dublin worked in Harcourt Square until the Garda headquarters moved to Kevin Street in 2018. Look who's a detective!

I'm late to start the series, but looking forward to reading them all. Those I have read are in red; those on my TBR shelf are in blue.