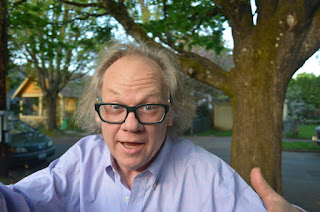 Stevan Allred is one of the most imaginative writers around. His new novel, The Alehouse at the End of the World, follows the hero on a quest to find his beloved on the Isle of the Dead. It's the latest title from Forest Avenue Press, with another eye-popping cover from Gigi Little.

Stevan recently talked with Rose City Reader about his new book, his inspiration, and what's up with the title:

The Alehouse at the End of the World takes place in the sixteenth century, sort of, in a world filled with myth, lore, bird gods, adventures, and a very sexy goddess. What inspired such an imaginative story?

I stumbled my way into this novel without a plan or an outline. I wanted to write something untethered by the constraints of the everyday world. Inspiration came from books I have loved for decades, books from my childhood (The Cat in the Hat Comes Back, Winnie-the Pooh), books from my youth (Frank Herbert’s Dune, C. S. Lewis’s Narnia stories, J. R. R. Tolkein’s Middle Earth novels), books from my adulthood (Ursula LeGuin’s The Left Hand of Darkness, Gabriel Garcia Marquez’s One Hundred Years of Solitude, Jan Morris’s Last Letters from Hav, Christopher Moore’s Lamb: the Gospel According to Biff, Christ’s Childhood Pal). I put some brushstrokes of what might be called magical realism into my first book, A Simplified Map of the Real World. I hoped I was ready to go full bore into something fantastic, something I came to think of as mythical realism.

What is your professional and personal background and how did it lead to writing fiction?

Professionally I am a property manager, which is a people business, and affords me the chance to get to know lots of different kinds of people whom I might never meet otherwise. Sometimes I find moments of revelation in my day job that work their way into characters on the page.

I absorbed a love of books and writing from my mother, who valued a life of the mind while doing yeowoman’s work as a stay-at-home mom. I wasn’t an athlete, growing up, though I dearly wished I were, even though I lacked the coordination and strength to compete with my peers. But I was a very good student, academically speaking, and books were my companions, especially books that told a good story. My mother was interested in everything – science, religion, history, the natural world – and I grew up with her broad curiosity informing the casual conversation of our home life.

How did you come up with the title?

The title eluded me for a very long time, all the way through two complete drafts. Usually I would know the title of a work by then, but for three years this novel was known on my computer as Great Fish, a phrase I borrowed from the story of Jonah in the King James Version of the Bible.

Early on in the third draft the title came to me in the manner that Annie Dillard has famously described:


One line of a poem, the poet said – only one line, but thank God for that one line – drops from the ceiling. Thornton Wilder cited this unnamed writer of sonnets: one line of a sonnet falls from the ceiling, and you tap in the others around it with a jeweler's hammer. Nobody whispers it in your ear. It is like something you memorized once and forgot. Now it comes back and rips away your breath.

It was a couple of weeks before I realized that the title of my first book, A Simplified Map of the Real World, landed on the same word as the title of this novel. It was another six months before someone pointed out to me that I had unconsciously echoed the title of a Douglas Adams novel, The Restaurant at the End of the Universe. Douglas Adams and I are very different writers on the page, but our worldviews are not so far apart.

Did you know at the beginning how you were going to end the story, or did it come to you as you wrote the book?

In the beginning I had the fisherman, an incident with a whale, a quest that would lead the fisherman to the Isle of the Dead, and not much more. The rest I made up as I went along.

I like to discover the story as I write it. I like to let the characters and their language drive the writing forward. Had I planned the whole thing from the outset I don’t think I would have finished it. For me, the joy of writing a story is all in the discovery.

I took great delight in stretching my imagination. The more I used my imagination, I discovered, the more I could use my imagination. It was like going into training for a marathon, building up the stamina and the range that would allow me to solve all of the problems my crazy version of the afterlife presented.

I read a lot, mostly fiction, and my tastes are pretty broad. I love speculative fiction, and I love reality-bound fiction. I read YA novels from time to time, like Erin Morgenstern’s The Night Circus – so good I read it twice, back-to-back. I also read history occasionally, mostly with an eye toward the often astonishing accomplishments of our forebears, and the unintended consequences of those accomplishments. In that vein I am much enamored of Charles C. Mann’s two works, 1491 and 1493.

Right now I am reading Paul Souder’s excellent Arctic Solitaire, which is Souder’s account of going after the perfect polar bear photograph in the northern reaches of Hudson’s Bay. Before that Stranger in the Pen, Mohamed Asem’s memoir about being detained by immigration as he re-entered the UK after a trip abroad – my highly recommended, must-read for these troubled times. I’ve recently finished three exemplary novels, all of which are well worth the time: Octavia Butler’s Kindred, Tayari Jones’ An American Marriage, and Eva Hornung’s Dog Boy. I love books that take me somewhere I’ve never been and make that world come alive.

It is far easier to make a bad sentence better than it is to try to write the perfect sentence in the first place. Writing is rewriting. You have to learn to live with your own bad writing until you figure out how to make it better. If you can learn to do that, and you get your butt in the chair on a regular basis, you’ll be okay.

Do you have any events coming up to read from or promote your book?

I have many, and you can go to my Stevan Allred website to keep up.

THE ALEHOUSE AT THE END OF THE WORLD IS AVAILABLE ONLINE, OR ASK YOUR LOCAL BOOK SELLER TO ORDER IT. IT WOULD MAKE A GREAT HOLIDAY GIFT FOR ANY READER WHO LIKES A GOOD YARN!