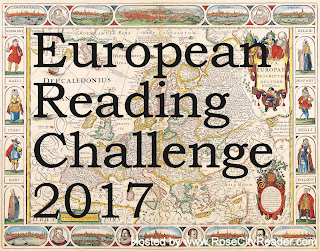 Bech at Bay by John Updike (Czech Republic; Czechoslovakia at the time)

When You Lunch With the Emperor by Ludwig Bemelmans (Austria)

The Heat of the Day by Elizabeth Bowen (UK)

On Rue Tatin: Living and Cooking in a French Town by Susan Herrmann Loomis (France)

The Comfort of Strangers by Ian McEwan (Italy)

The Shadow of the Wind by Carlos Ruiz Zafón (Spain)

The Redbreast by Jo Nesbo (Norway)

Roseanna by Maj Sjöwall and Per Wahlöö (Sweden)

The Manticore by Robertson Davies (Switzerland)

All the Light We Cannot See by Anthony Doerr (Germany)


I read books set in 13 different European countries, which is the most I have ever achieved doing this challenge. And I read several books written by European authors and translated to English, which I am usually not so good about doing.