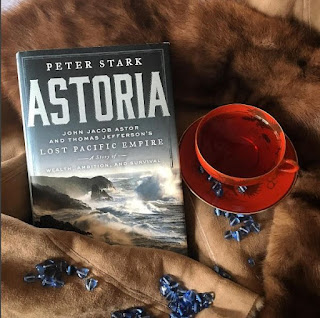 We read Astoria by Peter Stark for book club and I was swept away by this real life adventure. In 1810, John Jacob Astor, with the blessing of Thomas Jefferson, sent explorers by land and sea to start a new country at the mouth of the Columbia River, where Astoria, Oregon is now located.

Loaded with blue glass beads and other trinkets to trade with the Native Americans for much more valuable furs, the plan was to set up an emporium on the Pacific coast that could be the center of a trade triangle between China, America (meaning the established east coast), and this new country of Astoria in the middle.

That things didn't go as planned is Stark's 400-page understatement and the basis for the subtitle: John Jacob Astor and Thomas Jefferson's Lost Pacific Empire: A Story of Wealth, Ambition, and Survival. The things these adventurers went through! And did to themselves and others! Astoria is one of the most exciting books I've ever read, and it is all history.

It is sometimes hard to keep all the people straight, especially when the groups start splintering off. Just who is starving; being captured by or aided by friendly natives; stealing or eating horses; capsizing, canoeing, portaging, or losing whatever vessel they are in; and who is in charge or turning traitor at any time gets a little jumbled. But the epic story is so much grander than the little pieces.

Astoria provides a missing piece of American history between the Lewis and Clark Expedition and the opening of the Oregon Trail. And it is a fascinating piece of history.

Astoria inspired my most creative Instagram book picture ever -- the one posted above. Find me on Instagram @giliondumas.

If you would like your review of Astoria listed here, please leave a comment with a link and I will add it.


Posted by Gilion at Rose City Reader at 10:47 AM 3 comments