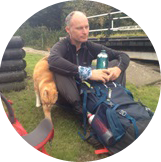 How did you come to write Walking with Plato?

I set off on the 1,150-mile trek from John o’Groats to Land’s End with no intention of writing a book about it. I figured that I’d have nothing to say that hadn’t already been said perfectly well by someone else. But the trip turned out to be such an unexpectedly wonderful experience that when it was over I felt I had something worth sharing.

Can you explain this end to end trek you took, from John O’Groats to Land’s End? Is it a regular hiking trail? How did you map your route?

John o’Groats is in the far northeast of Scotland, and Land’s End is in the far southwest of England. They’re the two furthest apart points on the British mainland. Hence, quite a lot of people cycle or walk between them.

There’s no set route. Some people take the most direct route they can, along roads. Others opt for more scenic routes, which is what my wife Wendy and I did. We basically linked together as many National Trails as we could.

Have you walked other famous long treks before, like the Pacific Crest Trail in the western United States or similar long routes?

No, this was my first proper long distance walk. I once walked a section of Britain’s Pennine Way for a week or so. But nothing on the scale of JoGLE (John o’Groats to Land’s End).

To be honest, I’ve never really been interested in walking. I agreed to do JoGLE mostly to please Wendy. It was a huge surprise to me that it turned out to be the best and most rewarding thing I’ve ever done.

What did you and your wife Wendy do to prepare for your journey?

Wendy’s the outdoor enthusiast. She loves choosing and buying gear. So she took charge of purchasing all of our walking and camping gear, and made sure that it was all as light as possible. We were living in Vietnam immediately prior to the trip. So we didn’t get to do any physical training beforehand.

How long did it take? And please describe a little of how you went about it – did you backpack and camp or how did you manage?

It took three months, start to finish. We were backpacking. Mostly we slept in our backpacking tent, but we treated ourselves to a night in a hostel or B&B at least once a week.

During the early part of the trip, carrying the tent and all of our gear was really tough on our bodies. We suffered some excruciating pain. But as the trip progressed we got stronger and stronger, and tougher and tougher. By the end, we were freakishly fit.

What is the meaning of the title and how was your hike “philosophical”?

I’m very interested in philosophy, and have read, thought and written widely on the subject. Like many people, I found that long-distance walking acted as a catalyst or stimulus for my thoughts. I found myself pondering with increased clarity about life, love, music, pleasure, pain, nature, literature… everything really. And I found that many ideas I was already familiar with, from various philosophers, took on a new and deeper meaning.

So, for me, the journey was as much a journey of the mind as it was a physical journey. The title, Walking with Plato, reflects this. And it’s also a reference to a period of my life (which I discuss in the book) when I did, in a literal sense, ‘Walk with Plato.’

Can you recommend any other books about finding mental and philosophical clarity through long wanderings?

My big recommendations would be Reveries of a Solitary Walker by the seventeenth-century Genevan philosopher Jean-Jacques Rousseau, and Robert Pirsig’s Zen and the Art of Motorcycle Maintenance. I was heavily influenced by both books.

What were the most surprising experiences of your hike?

The really surprising thing was that an experience I didn’t particularly expect to enjoy turned out to be the best thing I’ve ever done.

Really, Walking With Plato is my attempt to share how and why that came about, and maybe encourage people to buy some boots and do something similar themselves.

Did you bring books to read on your trip? Which ones?

I took my Kindle with me. So I had my whole library available. But my main read, which took the entire trip, was Tolstoy’s War and Peace.

For me, the Holy Trinity are Charles Dickens, Jane Austen, and Anthony Trollope. Maybe it should be a Holy Quartet and include Tolstoy.

I think they’ve all influenced me. But stylistically I think I’m most influenced by Russell and Hume who write with admirable clarity and brevity, even when discussing the most difficult and abstruse subjects.

I’ve written four books, to date, all non-fiction, and all related to philosophy. But next there’s a novel I’m burning to write. I’m keeping schtum about it for the time-being though.

WALKING WITH PLATO IS AVAILABLE ON LINE OR ASK YOUR LOCAL BOOKSELLER TO ORDER IT!

Posted by Gilion at Rose City Reader at 9:30 AM 1 comments