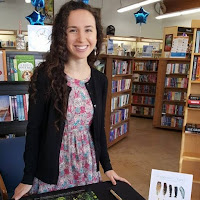 Francesca G. Varela's new novel Listen is the story of a growing romance between two college musicians who learn about themselves as they explore music and the natural world together. This exciting young author was recently interviewed in The Oregonian and her two books have been reviewed in several publications.

How did you come to write Listen? What led you to write a novel about two musicians who fall in love?

I wrote Listen during my sophomore year at the University of Oregon. I’d been taking piano lessons since sixth grade, and I loved classical music. As I delved further into environmental studies—my major—I felt like there was a bit of a disconnect between what we would perceive as “culture” and the natural world. This was something I wanted to explore; could something “refined” and “civilized” like classical music actually bring one closer to nature?

You describe yourself as an author of “ecological fiction”? Describe what you mean by that.

Ecological fiction is about writing with a sense of place. In both Call of the Sun Child and Listen, the protagonists’ relationship with their environment is central to the story. Both my novels have the same underlying theme—return to nature. Look at what’s around you. Reconnect with the natural world. As an environmental studies major I strive to highlight the beauty of nature and what we could be doing better as a society. I want to instill passion in my readers. I want them to take action in their own environments. To me, ecological fiction is, yes, about the characters, and the plot, like any other novel, but it’s also about the human place, and figuring out where we fit in amongst the wild places and the living creatures of the world.

What is your “day job”? How did it lead you to writing fiction?

I began my writing career while I was still a student; I wrote my first novel, Call of the Sun Child, when I was 18 and 19, and I wrote Listen when I was 19 and 20. At 23 I’m still finding my way in the world. I graduated from UO about a year ago, and since then I’ve interned with Oregon Wild and the Oregon Chapter Sierra Club, and I’ve written some articles for 350pdx. In the fall I’ll be heading off to the University of Utah to get my master’s degree in environmental humanities. I’m hoping what I learn there will not only lead me to a rewarding environmental career someday, but will also inspire my future novels.

Interestingly, I thought of the ending first. The entire story is based off of that ending scene, and trying to weave a story that would lead to that ending. The first thing I saw was a piano in a cabin, way out somewhere in the forest. Listen is the story of how that came to be.

My interest in the environment began with Ralph Waldo Emerson and Henry David Thoreau, and was later deepened by Aldo Leopold, Barry Lopez, and Farley Mowat. I’ve always been an avid reader of fiction as well, both the classics and new titles. Some of my favorite authors include Meg Wolitzer, for the ease and truth to her voice; Ursula Le Guin, for creating, essentially, a new genre, and one which I love—literary science fiction; JD Salinger, because Catcher in the Rye helped me realize what freedoms could be taken with writing style; Louise Erdrich, Sylvia Plath, Jack London, Elizabeth Strout. All of these writers have inspired me, and I continue to read new things all the time that I want to emulate in my own work.

I’m reading The Land’s Wild Music by Mark Tredinnick. It’s a non-fiction anthology about the author’s experiences meeting up with some of the best nature writers, including Barry Lopez and Terry Tempest Williams. It’s beautifully written and lends great insight into the nature of nature writing.

You have a terrific website and facebook page, and you are also active on Twitter and Goodreads. From an author's perspective, how important are social networking sites and other internet resources to promote your book?

Social networking allows me to connect with readers who I would never be able to reach out to in real life. Based on common interests, people who are, say, nature-lovers, or fans of classical music, can find my blog on Wordpress, or follow me on Twitter, or look up my book on Goodreads. And once we’re connected, I can share news about my books, and continue to connect with readers through posts.

The classic “write about what you know” has been incredibly helpful. Of course this should not be taken literally; it is fiction, after all. But I try to base what I write in some form of truth. I try to pull everything from a deep place of either memory or dream, and to shape that piece of myself into something new. I don’t write what I think others want to read. Everything I write is grounded in meaning—everything I write means something to me.

The best thing about being a writer is the simple act of creation. There’s nothing more satisfying than writing the last page of a novel. I’ve dreamed of being an author since I was in third grade, so when I look on my bookshelf and see my own name on some of those spines, well, I feel what I can only call a surge of joy.

I try to write 500 words a day. I’ve worked on a few projects since Listen. Sometimes I also write in journals, and I post weekly on my blog. I’m planning to see where my graduate education takes me, and perhaps write a book—fiction or non-fiction—for my thesis.


THANKS FRANCESCA!
LISTEN IS AVAILABLE ON-LINE IN PAPERBACK OR KINDLE.