What Are They Reading? Letting Go by Philip Roth 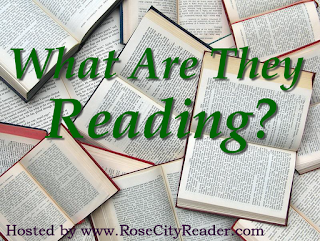 Letting Go was Roth's first novel, published when he was only 29, but after he won the National Book Award (for the first time) for Goodbye, Columbus (reviewed here).

Letting Go catches flak for being long and more traditional than Roth's later books.  I am only about halfway through it and I don't care how long it is. I want it to go on and on.

Letting Go is the story of Gabe Wallach, a college professor, and his relationship with Paul and Libby Herz, from when they meet at graduate school in Iowa and then work together in Chicago.  The main plot is broken into side stories and set pieces, including those about Gabe's father, Paul's parents, and Gabe's girlfriend Martha.

Since Gabe and Paul are both English professors, it is no surprise that the characters in Letting Go read and talk about books.  Henry James's The Portrait of a Lady plays a big role in the first section of the book, as Gabe and Libby build an awkward, sexually charged friendship out of their discussions of James's masterpiece.

Posted by Gilion at Rose City Reader at 6:00 AM 1 comments

Labels: Philip Roth , What Are They Reading?