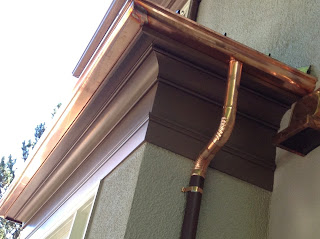 I have eency weency spiders on my mind because Portland has been invaded by them.  You can't walk between two trees, bushes, gateposts, or any other pair of things closer than eight feet apart without getting spider web stuck to you or, worse, one of the little critters scurrying on you. Ick!

The kitchen remodel is still waiting on exterior bricks.  The word is, the bricks are now in the state of Oregon -- not at my house, but within the borders of the state.

In the meantime, I was just pleased to see this little length of copper drain pipe finally get installed.  It meant we could finally say Bye Bye to the black PVC pipe that has been hanging from our eaves since January. 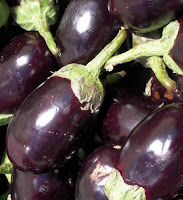 Inside the kitchen was busy because yesterday was Caponata Day at my house.  Every year, I take advantage of friends' garden bounty and our local farmers market and spend one day making a huge batch of caponata.  I freeze it in smaller packages to enjoy all winter.

Part of this tradition is to try to find a caponata recipe in my Cookbook Library, get frustrated, and make it up from versions I've seen on the internet or eaten myself. Despite the number of Italian cookbooks I have and enjoy (see list below), as far as I found before giving up, only one of them has a recipe for eggplant caponata and it is a hugely simplified version -- basically sauteed eggplant with some vinegar and garlic.

Amounts depend on what you like and have, traditionally heavy on the eggplant.  In years where friends grew lots of red or yellow peppers, I've included those too.

Separately roast eggplant, zucchini, onion, and celery with olive oil, turning occasionally, until browned and soft, but not mushy.  Do the same with the tomatoes, but they will get mushy.  Roast the garlic cloves in olive oil either in the oven, on the stove top, or in the microwave.

Once cooked, combine the vegetables with the olives and capers and stir it all together. Add vinegar, salt, and pepper to taste.  Add more olive oil if desired.

Eat warm or at room temperature.  Add more vinegar right before serving to brighten it up.  Eat as is for a side dish. Chop it up a little and serve with crackers or bruschetta for an appetizer -- very good with goat cheese.  Or chop it up a lot and use as a sauce with polenta or pasta.

Many recipes call for canned tomato sauce or canned chopped tomatoes instead of fresh, but it turns out more sauce-like, which is good if you want sauce, but not as good as an appetizer.  You can always add tomato sauce later to use it as a sauce.


MY ITALIAN COOKBOOKS
(with no caponata recipes that I found)

Posted by Gilion at Rose City Reader at 2:35 PM 2 comments