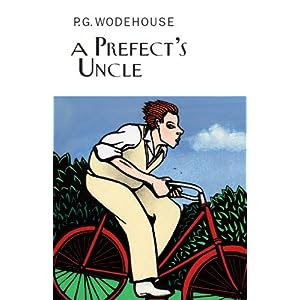 Finally, on retiring to bed and being pressed by the rest of his dormitory for a story, he embarked upon the history of a certain Pollock and an individual referred to throughout as the Porroh Man, the former of whom caused the latter to be decapitated, and was ever afterwards haunted by his head, which appeared to him all day and every day (not excepting Sundays and Bank Holidays) in an upside-down position and wearing a horrible grin. In the end Pollock very sensibly committed suicide (with ghastly details), and the dormitory thanked Farnie in a subdued and chastened manner, and tried, with small success, to go to sleep.

A Prefect's Uncle is Wodehouse's second published book. Like his first, The Pothunters, it is set in an English boarding school for boys. Except in the long passages describing cricket matches, it is a charming and funny book that hints at the hilarious style Wodehouse later perfected.

Posted by Gilion at Rose City Reader at 5:00 AM 2 comments