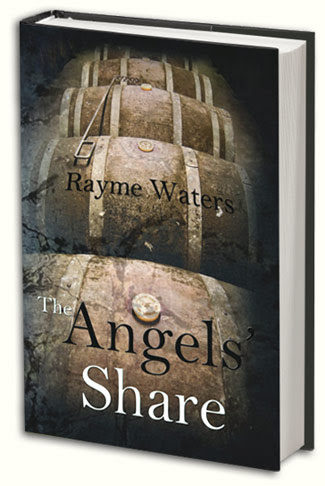 When I had a bad day and my brain buzzed like angry ants and I couldn't think or talk straight, I thought of what the characters I admired would do. . . .  I read for hours a day absorbing so much Victorian literature that my internal diction started shaping into something more formal, more old-fashioned.

The engaging heroine is recovering from addiction with the help of Jane Eyre and her other favorite characters from Dickens, George Eliot, and the like.

Rayme Waters wrote a guest post for Rose City Reader explaining how she incorporated the themes and lessons of 19th Century fiction into her novel.


The Angels' Share is already generating buzz. For example, Diane Johnson, author of Le Divorce, says it "will completely absorb you.” And Meg Waite Clayton, author of The Wednesday Sisters, calls it a "compassionate debut novel" and says, "Set in the quiet luxury of Nob Hill, the counterculture of Bolinas, and the evocative wine country of Sonoma, Angels' Share is as tasty as the 1919 Primitivo [the heroine] drinks on this journey of recovery.”

PUBLISHER'S DESCRIPTION: Born into a tumultuous world of neglectful bohemian parents and an overbearing grandmother, Cinnamon Monday lives through an imagination inspired by the nineteenth-century heroines she admires. As she grows older, and her make-believe worlds are not enough to protect her, she descends into drug addiction and eventual resignation. When this finally leads her to be physically beaten near the point of death, she is saved by a compassionate neighbor named Sam who gives Cinnamon the opportunity to reclaim her life. Now, working at Sam’s vineyard in the beautiful Dry Creek Valley, Cinnamon Monday attempts to put her life in order, find the will to overcome past demons, and utilize her strengths to live a positive, successful life on her own terms.


Teaser Tuesdays is hosted by Should Be Reading, where you can find the official rules for this weekly event.