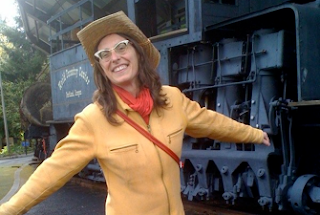 Kristy Athens is the author of the newly released Get Your Pitchfork On! The Real Dirt on Country Living (published by Process Media).  Her nonfiction and short fiction have been published in a number of magazines, newspapers and literary journals, most recently Jackson Hole Review, High Desert Journal, Barely South Review, and the anthology Mamas and Papas. Her text-infused, repurposed collage artwork appears in 1,000 Ideas for Creative Reuse and is available for purchase at her Etsy store.

KRISTY TOOK TIME FROM HER VERY BUSY BOOK TOUR TO ANSWER QUESTIONS FOR ROSE CITY READER:
You've written a practical guide to living in the country, but you are a city transplant yourself. How did you end up in the country?
My husband and I both grew up in a suburban area, and then lived in Minneapolis and Portland as adults. We were interested in the idea of rural life, so we bought seven acres in Washington State in 2003.


Your new book, Get Your Pitchfork On: The Real Dirt on Country Living, is charming and funny, but it is also chock-o-block full of practical advice on every aspect of rural life. How did you amass such an encyclopedia of useful information?
A lot of it came from my own experience and from conversations I had with friends. When I started turning my essays and vignettes into a proper book, I conducted research by visiting other rural places, interviewing other rural people, and reading books and Internet articles.


What was your inspiration for compiling what you learned about country living into a book?
While the books I owned (see below) were useful, some were also outdated. They gave advice about things I would never do (melt snow for bathing) and had no advice for things I needed (high-speed Internet). Also, no one had guidance for the social aspects of living in a rural community. Since the book I wanted didn’t exist, I decided to write it myself.

Can you give us an example or two of advice you wished you had before you moved to the country?
1. Buy a tractor. 2. Don’t burn oak firewood in October (save it for cold winter months).


What most surprised you about moving to the country?
I was most surprised by the intensity of joining a rural community. You’re not just taking possession of a house, you’re being adopted into a large family. You don’t get to choose your new “cousins,” nor control whether they are nice to you or beat you up behind the barn when no one is looking. Everyone cares about you, in both a good way and an oppressive way.

Can you recommend any other books to help people prepare for rural life?
As a novice gardener, my main go-to books were: The Encyclopedia of Country Living by Carla Emery; The Garden Primer by Barbara Damrosch; and Introduction to Permaculture by Bill Mollison. And, to a lesser degree: Back to Basics from Reader’s Digest and Mother Earth News magazine.

When we got chickens, I picked up Storey’s Guide to Raising Poultry. The Storey’s guides are great but, as I remind readers in GYPO, focus on raising animals for profit. Lacking profit as a motive changed some of my decisions. For example, I let live a chicken that stopped laying after about three months; a regulation farmer would never tolerate that waste of resources.


What is your work background? How did it lead you to writing your book?
I started my career as a freelancer writer and editor in 1990, so it’s not surprising that I wrote a book. I have published dozens of articles and short stories. This helped me not only for the obvious craft reasons, but because freelancing forces you to explore unfamiliar topics on a regular basis, often by interviewing people you don’t know and by asking lots of questions.

A big part of good writing is being observant: noticing details and anomalies. So when I moved to the country, every time something struck me as different from what I knew as an urban person, I wrote it down.


What is the most valuable advice you’ve been given as an author?
The most important part of writing is to put your butt in the chair; the book is not going to write itself. A more refined expression (which, I think, comes from former Poet Laureate of Oregon William Stafford): “You can’t edit nothing.”


You have a terrific website, blog, and facebook page. From an author's perspective, how important are social networking sites and other internet resources to promote your book?
I guess the answer to that question depends on one’s goals. Assuming you want to get your work into other people’s hands, Internet stuff is very important. The caveat with social networking is that you have to work hard to move the excitement beyond your circle of friends and family. Blogging and actively commenting—constructively and not “advertisingly”—on related blogs is one way to do that.


Do you have any events coming up to promote your book?
In June I head out to Eastern Oregon! I will read in Bend on Saturday, June 16, at the Nature of Words Center; Burns on Monday, June 18, at the Harney County Library; Baker City on Tuesday, June 19, at the Crossroads Carnegie Art Center; and Enterprise on Thursday, June 21, at the Fishtrap House.

This is a very special trip for me, as I used to bring authors to these towns when I ran the Oregon Book Awards program in the early 2000s, and I love to visit my friends from that time! I also wrote half of GYPO while on a two-month writer’s residency in Harney County.

When I return, I’ll read on June 28 at one of my favorite bookstores ever, Broadway Books in Portland. I will travel throughout 2012; you can find the rest of my schedule on the GYPO website.

You lived in the country for several years, but have since moved back to the city. Why the switch back and would you try it again?
Mike and I got caught up in the recession of 2009 and had to sell our farm. We hope to move out to a rural area again in the next few years.


What’s next? Are you working on your next book?
I have a bunch of ideas in the pot; I’m just letting them bubble around for a while to see what floats to the top. Generally, I’m interested in another book like Get Your Pitchfork On! -- not the country theme, but a guidebook about some kind of life passage or experience that people face but don’t receive adequate instruction for.

A big part of living in the country involves growing your own food -- both the animal and vegetable kind. Large sections of Kristy's book cover raising livestock, gardening, and preparing and preserving food, so I am including this as my Weekend Cooking post.