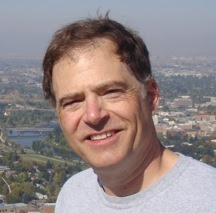 Lenhardt Stevens is the author of The Hapless Valet, an offbeat mystery featuring Draper Burns, valet and general troubleshooter for a global media mogul.

In this first novel, Burns is dispatched to Portland, Oregon to get to the bottom of the mysterious death of a screenwriter on location for Burns's boss. Movie people, hoodlums, federal agents, and Portland characters combine with clever plot twists in a Pacific Northwest setting to make The Hapless Valet a most entertaining read.

Len writes and lives, with his wife Susan, in Portland, Oregon.  He'd like to also say "Winner of 2008 National Book Award for fiction", but fears that someone could try to verify that.

I was pleased to interview Len as he launches his new book.

How did you come to write The Hapless Valet?
Every writer has a mystery in them. Many fiction writers, regardless of their favored genre or subject matter, are compelled to write a mystery. A huge part of western culture has been influenced by novels, movies, radio and television based on the mystery form. Mysteries are popular. Readers find mysteries entertaining. Writers want to entertain, at least I do. After a lot of writing where perhaps the entertainment value took a back seat to the “big” literary idea, I decided to write something more fun. The mystery market is especially saturated, so the challenge is to create characters and setting different enough to set your work apart and entice readers to give you a chance.


Your novel is set in Portland, Oregon and the city is very much a part of the book. Are there things about Portland that make it a good setting for a mystery?
Absolutely! The city has established its bona fides as a muse for writers and artists. Poets, film directors, musicians, song writers and chefs thrive on the city's zeitgeist. Mystery writers have also been inspired. Hipsters, indie artists, green politicians and entrepreneurs, old style capitalists, indigents, meth heads and felons, lawyers, bike riders, rich east coast transplants . . . so many kinds of people converging in east-side neighborhoods, rain soaked downtown blocks and the west hills create an urban setting that teems with ideas for mystery writers. Having lived here all my life, I might have a perspective on Portland's history that provides extra fodder for the mystery reader.


What did you learn from writing your book – either about the subject of the book or the writing process – that most surprised you?
For me, the slow deliberative process of writing doesn't really lend itself to many surprises. One hears of writers whose bursts of inspiration propel them to manically write a novel in a month or two or even a few weeks. If that happened to me, it would be surprising.


What is your "day job"? How did it lead you to writing fiction?
I work on behalf of my family's real estate and business interests, the kind of administrative and operational toil that's devoid of artistic creativity. For most people in this type of environment, a creative outlet is essential. Sometimes, I try to convince myself that I don't need to write. I haven't succeeded.


What is the most valuable advice you’ve been given as an author?
I'm looking forward to getting it.


What do you do to promote your books? Do you use social networking sites or other internet resources?
I'm pursuing all avenues of digital marketing. You can find The Hapless Valet e-book on line at Amazon and Barnes & Nobel. Kirkus Reviews gave the novel a pretty good review, so I'm trying to exploit that. The Hapless Valet has its own Facebook page and I provide book seller links to the general public and friends. I've also “tweeted” the links on Twitter @lsshart. Of course, I try to catch the attention of book review bloggers like Rose City Reader!


Do you read e-books? What about self-published e-books?
I read e-books. Self-publishing is fine, as long as the writing craft and rigorous editing is applied. Powerhouse marketers like Apple, Amazon and FaceBook are committed to e-publishing so the future is promising for writers frustrated by the traditional publishing route. Agents and publishers tied to the old way probably aren't sleeping very well because of the rise of digital publishing.


Who are your three (or four or five) favorite authors? Is your own writing influenced by who you read?
Authors who can explain a big chunk of humanity through storytelling get my attention. Tolstoy, Dostoyevsky, Eliot, Trollope, Faulkner, Mishima, Kesey were epic writers who amaze and inspire me. Dickens is a particular favorite of mine because, writing in installments for magazines, he mastered trenchant social insight while employing the chapter ending cliffhanger. Richard Wright's Native Son, Peter Carey's fiction about Australia and David Foster Wallace's prose on steroids are some of my favorite modern reads. If I could convey gothic mood, tension and setting like Poe, express irony like Waugh, Orwell and Wodehouse and keep the reader guessing like Christie and Hammett can, I'd be pretty content with my writing.


What are you reading now?
I just finished Julian Barnes's The Sense of an Ending. It's a fable about the fallacy of memory and perceived acts of insignificance. I'm downloading Henry Miller's Tropic of Cancer as we speak.


Is The Hapless Valet the beginning of a series? Is a sequel in the works?
There's a lot of possible conundrums in Portland that could entangled Draper Burns.


Have you written or are you writing any other books? Any plans to publish them?
I'm revising a novel I wrote a few years ago about two men who grew up together in Oregon, had an abrupt falling out, are fatefully reunited in Thailand twenty years later and engage in various misadventures. It was written with the hope of being read by others.