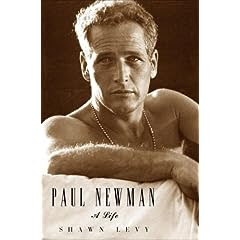 My review of Paul Newman: A Life by Shawn Levy is in the hands of my able editor at the Internet Review of Books. It was a difficult book to review because there isn't much to criticize -- it is a quality book that tells and interesting story. It is well written, organized logically, accomplishes its goals, and doesn't have any flaws worth mentioning. So I tried to explain just why I thought the author did a good job of making a celebrity biography interesting to readers who do not usually read celebrity biographies. The September issue of the IRB, including my review, will be out on September 15. In the meantime, here are a few tidbits I learned from reading Newman's biography: • Newman really did concoct his “own” recipe for the salad dressing he used to launch the Newman’s Own brand. His Westport, Connecticut caterer, Martha Steward, judged the taste test for the original commercial recipe. • Although not starting until his mid-forties, Newman became an avid race car driver. He came in second place at the famous 24-hour race in Le Mans and, at seventy, became the oldest person to win an officially sanctioned auto race. • Newman and Joanne Woodward were as famous for their 40-year marriage as for their careers, despite Newman’s brief and tawdry affair with a Hollywood gadabout named Nancy Bacon. The affair began during the filming of Butch Cassidy and the Sundance Kid and Bacon later wrote about it in her 1975 autobiography, Stars in My Eyes . . . Stars in My Bed. • A “functioning alcoholic,” Newman typically drank a case (as in 24 beers) a day. A penchant for exercise and a hummingbird metabolism kept him lean, handsome, and apparently sober, in spite of his prodigious consumption. • Newman was a true philanthropist. In addition to giving away several hundreds of millions of dollars to charities, he rolled up his sleeves and worked himself. For example, not only did he come up with the idea of a summer camp for children with cancer, he designed the first Hole in the Wall camp himself, hired the doctors to staff it, and visited at least twice every summer to play and eat with the kids. What a fun book!