Review of the Day: The Floating Opera 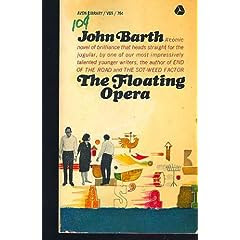 Like other books that supposedly take place in one day – most famously, Ulysses; more recently, Saturday – Barth’s novel really tells the story of Andrews’s entire life, including the loss of his virginity, his macabre WWI experience, the death of his father, and the long-running affair with the wife of his best friend.

In classic picaresque tradition, Barth uses humor and adventure to examine the most serious of subjects. And he succeeds – it is funny, primarily in Barth’s clever wordplay and in the juxtaposition of ordinary, small town life such as the old men murmuring away the day on the sunny bench outside the general store or the audience appreciation of the rinky-dink showboat vaudeville show, and the extraordinary issues Andrews faces as he plans his suicide, such as the nature of marital fidelity and the value of life.

Barth is best known for The Sot Weed Factor (which made the All Time-100 list) and Giles Goat-Boy (one of Anthony Burgess’s 99 favorites). Floating Opera is far shorter than either of the others makes for an accessible introduction to an author vaunted in post-grad lit programs but not often popularly read.

Posted by Gilion at Rose City Reader at 7:00 AM 3 comments