Cookbook of the Day: The Chez Panisse Menu Cookbook 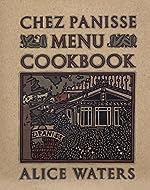 American foodies owe a debt of gratitude to Alice Waters. She is the patron saint of California cooking, or new American cooking, or whatever you want to call it. She’s the one who gave us goat cheese croutons, roasted beets, mache, and so many other now-ubiquitous dishes. “Former Chez Panisse chef” is just as much a brand name as the brand named meats and produce she serves at her restaurant.

For those reasons, I actually read The Chez Panisse Menu Cookbook cover to cover, the way one reads an MFK Fisher book – to get an understanding of the cook’s philosophy as well as recipes. Both women write in a formal style and have strong ideas about ingredients, preparation, presentation, and consumption. Unfortunately, Water’s writing is more spare, perhaps as befits a patron saint, and lacks the pithy humor that leavens Fisher’s books. Reading her prose is more like learning a lesson than being entertained.

Which may be why this book struck me as an essential book for someone who wanted to learn to be a restaurant chef, but not particularly useful for someone cooking at home. Most of the menus require some final preparation of the next dish after the preceding one has been served – possible in a restaurant, but not much fun at a dinner party if the cook wants to eat with the guests.

The individual dishes are also complicated or labor-intensive, causing me to often think as I read, “I’d eat that if someone made it for me.” Waters is particularly fond of leg of lamb, lobsters, and quail and her recipes for these show the difficulty in preparing them at home. First, most of the lamb recipes call for spit-roasting the leg of lamb. She even explains how to build a spit. In my spit-deficient kitchen, those recipes are not possible.

Second, while I find a steamed lobster to be a wonderful treat on a special occasion, Waters takes the fun out of it with instructions to semi-cook a lobster, then remove the meat and make a fumet with the shells – a process involving roasting the shells, making the broth, putting the shells in a blender, then straining the whole thing through a fine sieve – then finish cooking the lobster. Whew!

Finally, quail do not usually show up on my dinner table, but if they did, I do not think I’d have the dedication to follow Walter’s recipes. In most of her quail recipes she gives similar instructions: “Marinate the quail in a cool place overnight . . . turning the quail four to five times during this time.” No little boney bird is worth losing a night of sleep.

Reading this Menu Cookbook made me want to spring for dinner at Chez Panisse, but it did not make me want to don an apron and start cooking.