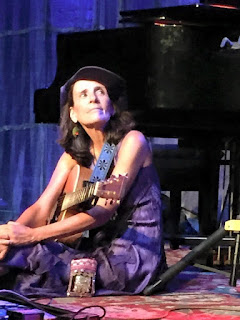 AUTHOR INTERVIEW WITH SUZZY ROCHE
Suzzy Roche has had a successful career as a singer/songwriter, recording numerous CDs with her band The Roches, as a solo artist, and with her daughter Lucy Wainwright Roche. She turned to prose writing with two earlier books, a novel Wayward Saints, and a children's book Want To Be in a Band?

Suzzy's second novel, The Town Crazy, is out now from Gibson House Press. Find my review on this post.

Suzzy talked with Rose City Reader about her new book, new music, and authors who inspire her:
How did your new book, The Town Crazy, come about?

I don’t know! Unlike my first book, which came out of a short story I had written, this one seemed to appear out of thin air. I simply sat down at the computer and started to write from a deeply unconscious place, much like dreaming.

The story is set in suburban Pennsylvania in 1961, in a Catholic community. What drew you to this time and place for the setting of your novel?

The novel takes place during a time when I was a young child. I don’t remember much of my childhood, just fleeting images. I was interested in exploring those shards of memory. Though all the characters are fictional, and the plot does not bear specific resemblance to my life, there is something of the mood in the book that reminds me of my early childhood. 1961 seems like another era these days. I was also often thinking of the poet Anne Sexton as I wrote the book.

Themes of motherhood and marriage. Childhood terrors and cruelty. Religion, as it is used to control and shame people. Small town power struggles. And how art can flourish or be destroyed.

You have had a successful career as a singer and songwriter. How did that career lead to fiction writing?
I’ve always been drawn to the idea of making something out of nothing. As an artist, you are always coming up against the very hard truth that no one is waiting for your work. You just have to sit down and do it. Writing is a solitary endeavor, and therefore can save an artist’s creative life.

What did you learn from writing your book – either about the subject of the book or the writing process – that most surprised you?
What I’ve learned over the years about creating anything is to keep going, never quit, but don’t push. Creations have a way of taking their time. They are like living organisms that need shepherding. You have to listen deeply to the thing you are creating.

Did you know right away, or have an idea, how you were going to end the story? Or did it come to you as you were in the process of writing?
In this case, I had no idea what was going to happen any chapter. I let the story play out in my mind like a movie.

Were books an important part of your household when you were growing up?
My mother instituted a tradition called “Reading Hour.” Typically, it occurred while she made dinner. She’d put on classical music and we all had to sit in the living room and read. We moaned and groaned all the way through it. We were also busy writing our own stories.

Who are your three (or four or five) favorite authors? Is your own writing influenced by the authors you read?
Larry McMurtry for his empathy, Elizabeth Strout for her biting wit, John Coetzee for his heartbreaking clarity, Meg Wolitzer for her vulnerability, Toni Morrison for her wild fearlessness. Just to name a few. Reading has so much to do with the frame of mind of the reader. Sometimes I revisit a book, and it hits me in a totally different way.

What kind of books do you like to read? What are you reading now?
Right now I am reading Ronnie Gilbert’s autobiography because I am going to record it for Audible. She was a member of the folk group The Weavers.

What is the most valuable advice you’ve been given as an author?
You can start with 10 or 15 minutes a day. Also, keep the adjectives and adverbs to a minimum and try not to overuse the words was or is. REWRITE.

What is the best thing about being a writer?
You can live in an alternate universe.

I am very active on Facebook and I do have a website. Because my book is published by Gibson House Press, an independent press, I doubt anyone would have noticed it was there if I didn’t have a fan base. I am very interested in my readers and listeners. They have kept me alive when the rest of the world ignores me. But it’s a relationship that requires care and respect, like any other relationship.

What’s next? Are you working on anything new right now?
I just released a CD with my daughter Lucy Wainwright Roche. It’s called I Can Still Hear You. It’s a beautiful recording. Between that and The Town Crazy I pretty drained right now. I don’t have an idea in my head. Always an unsettling part of the creative process. But the field must lie fallow. I hope I’ll be lucky enough to get lost in another project, but who knows.

THANK YOU, SUZZY!
THE TOWN CRAZY IS AVAILABLE ONLINE IN PAPERBACK AND EBOOK.