A Small Earnest Question and Signatures: Literary Encounters of a Lifetime on Book Beginnings 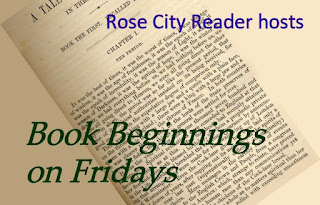 Fridays seem to come around faster and faster, even though the hours of each coronatime day can go so slowly! All this working from home is distorting my sense of time as well as dissolving my social skills.

If you post on social media, please use the hashtag #bookbeginnings so we can find each other and encourage others to join in the fun!

I have two book beginnings today because loads of new books have been drifting into my house lately.

It was early spring on Washington Island, which, as any Islander could attest, is frequently an exercise in disappointment.


A Small Earnest Question by J. F. Riordan. This is the fourth book in Riordan's North of the Tension Line series. It looks completely charming. I haven't read the earlier books, so I'll give you the publisher's description and you will know what I do:

It's spring on Washington Island. Despite her concerns about Roger's desire to bartend, Elisabeth is eager to plan a grand opening for their newly remodeled hotel, but she quickly realizes that she may also need to make accommodations for Roger's proposed goat yoga classes. Bored and lonely, Oliver Robert joins bartender Eddie in forming a great books club at Nelsen's, and Emily Martin, determined to make her mark on the community, forms a new Committee of the Concerned. When Emily decides that the Island needs a literary festival, complete with a famous author, she imprudently seeks out a notorious celebrity, hoping, as always, to enhance her own prestige. Real estate agent Marcie Landmeier confides that an unknown someone is buying up the Island's shoreline, newly-appointed Fire Chief Jim Freeberg contends with a string of suspicious fires, and Pali and Ben have a spiritual encounter that will change them both. Meanwhile, drawn once more into local controversy, and awash in suspicion herself, Fiona Campbell must determine the answers to questions that will affect her future, and the future of the entire Island. A Small Earnest Question is Book Four in the award-winning North of the Tension Line series, set on a remote island in the Great Lakes. Called a modern-day Jane Austen, author J.F. Riordan creates wry, engaging tales and vivid characters that celebrate the beauty and mysteries of everyday life.


What do you think? It sounds good to me! A Small Earnest Question launches August 3 from Beaufort Books and is available for pre-order.

The convention is that if you happen to meet authors and have just bought or acquired a book of theirs, you ask them to sign it.


Signatures: Literary Encounters of a Lifetime by David Pryce-Jones, from Encounter Books. Pryce-Jones is a British author and commentator. Signatures, his latest book, is a collection of vignettes describing 90 authors and the personally inscribes books they gave him.

I knew I wanted a copy of Signatures as soon as I read about it. It is the kind of bookish memoir filled with literary tittle-tattle that is right up my alley. Authors featured include several of my favorites like Kingsley Amis, Saul Bellow, Lawrence Durrell, Rose Macauley, Jessica and Nancy Mitford, Edna O'Brien, and Muriel Spark.


Mister Linky's Magical Widgets -- Thumb-Linky widget will appear right here!
This preview will disappear when the widge tis displayed on your site.
If this widget does not appear, click here to display it.

Also on Fridays, Freda of Freda's Voice hosts The Friday 56 where participants share a two-sentence teaser from page 56 of their book. You can also share the equivalent from your e-book or audiobook by finding a teaser at 56%.

From A Small Earnest Question:

He arrived at the shop one morning at his usual unearthly hour to discover that one of the yoga groupies had set up camp in his parking lot. There was a bright blue pup tent accompanied by a pickup truck.

Pentwyn is our family farmhouse twenty minute from Hay-on-Wye, and every time I drive to that bibliophile town I pass Oakfield, the handsome red-brick house that used to be the Burney home. At the age of eighteen, Christopher Burney ran away from Wellington in the hope of becoming a soldier rather than the classical scholar that the headmaster intended him to be.


-- from the chapter on Christopher Burney, author of The Dungeon Democracy (1946).


Posted by Gilion at Rose City Reader at 5:00 PM 14 comments