Review of the Day: Clouds of Witness 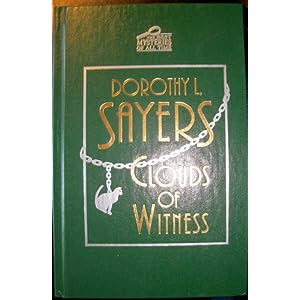 Clouds of Witness is Dorothy L. Sayers' second Lord Peter Wimsey mystery, following Whose Body? In the first, Lord Peter had sprung full-grown from the mind of Sayers, a cross, she said, between Fred Astaire and Bertie Wooster. His backstory included success as an amateur detective in cracking several high-profile crimes. His involvement in solving the murder of an unidentified man found in a bathtub was clever, but somewhat formulaic.

Sayers hit her stride in Clouds. Lord Peter and the other characters are formed more fully and the plot is more intricate, making for a far more satisfying story.

When the fiancé of Lord Peter's sister is found shot dead at a weekend house party, Lord Peter's brother, the Duke of Denver is arrested for murder. Lord Peter, assisted by his intrepid valet Bunter and his police officer buddy, Charles Parker, eventually unravel the mystery, but only after a series of near-misses and nail-biters involving gun-toting Socialists, a violent and jealous husband, a harrowing trans-Atlantic flight, and quicksand. The airplane adventure alone must have given Lord Peter James Bond-like status when the book was first published in 1926.

With her mix of intricate plotting, humor, and style, it is no mystery why Sayers and her hero Lord Peter have remained popular through the decades.

OTHER REVIEWS
If you woudl like your review of this or any other Dorothy L. Sayers book listed here, please leave a comment with a link and I will add it.


NOTES
This is one of my choices for the Vintage Mystery Reading Challenge.  hosted by My Reader's Block.

I am reading Sayers' Lord Peter series in order. I look forward to reading them all.