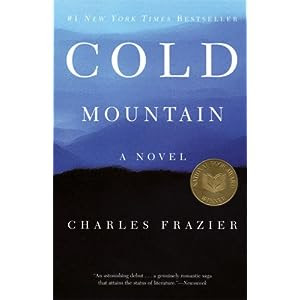 "At the first gesture of morning, flies began stirring."

This has been sitting on my TBR shelf since it won the National Book Award in 1997.  There are many reasons why I haven't read it -- none of them necessarily compelling.

First, my then husband was reading it while we were going through our divorce and he told me I wouldn't like it.  He was wrong about a lot of things, but he did know my taste in books.

Second, I saw the movie, which I thought was a little slow and boring.  So I wanted to wait to read the book until I had forgotten enough of the story that the book had a chance to grab my attention.

Finally, I've come to a point where I am just not interested in Civil War books.  As I discussed in my reviews of Geraldine Brooks’s Pulitzer-winning March (reviewed here) and Hallam’s War by Elizabeth Payne Rosen (reviewed here), I get tired of the hoop skirts, hollerin’, and hacksaws that make up most Civil War novels.

But the power of the list has finally motivated me to read this.  So far, I find it to be slow and a little boring, but it is keeping my attention.  It starts closer to the end of the war, so the hoop skirt and hollerin' phases were already over.  There were some gruesome battle and injury scenes and a story of progressive amputation, but not with a hacksaw at least.

It may grow on me.

This will count as one of my National picks for the 2011 Battle of the Prizes, American Version, challenge.  There is still LOTS of time to sign up.  Click the link or the picture to go to the main challenge post.