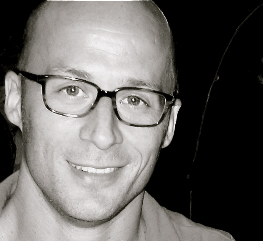 Steve Anderson is a Portland-based author whose historical espionage thriller The Losing Role is available on Amazon Kindle, iBooks, and other e-readers. His earlier novels, False Refuge and Besserwisser are also available. He describes his books as crossing the genres of mystery, crime, historical, noir, espionage, war, and humor. 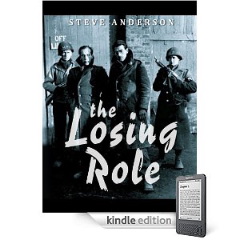 Steve has worked in advertising, marketing, and journalism with the Associated Press. He’s been a Fulbright Fellow, a language instructor, a waiter, and a freelance copywriter. Steve is also a screenwriter and has had short stories published online and in print. He’s a big soccer fan. He’s traveled a lot and lived in Germany but now lives with his wife René here in his hometown of Portland.

It is always interesting to talk with authors about their books and get their take on writing and publishing.  Steve generously shared his answers about his work and inspirations, marketing in the internet age, e-books, and the life of a writer:

Your novels are often set in a volatile period, such as WWII. What draws you to that type of story?
Periods and settings in turmoil are fertile ground. I'm always drawn to characters who are stuck between two worlds and in over their heads with a plan that's doomed to fail, but they stick with it anyway. They often don’t know exactly what they’re doing, but they believe in making the effort. That is the main character in all my books, really -- you just made me realize that.

My books tend to involve some overlooked historical theme. I like researching and using historical detail when it serves the story (but not too much), and some sort of duplicity often in the form of espionage or crime. I like setting up a clear sense of place for the reader. And there has to be loss. For a story to be good, for a character to gain something, something also has to be lost. It’s sad but true and I like realism. There’s truth there, if you can find it.


What have you learned from self-publishing e-books that you think is the most valuable lesson? What surprised you the most?
It’s a different trajectory compared to what I know about a print book release from a publisher. There’s not necessarily a clear window of marketing opportunity. It’s a long game. You have to be patient. As far as getting reviews from established reviewers, there are just some places you can’t be because you don’t have the physical book they require, and even when you do, any self-publisher of a print book will tell you it’s tough to get a review.

At first I just wanted to free my books from the drawer. Then it became this revelation -- I felt this huge weight lift off me. I quit worrying about if my agent was going to find a home for the one book. I also learned that many readers don’t know or care what publisher you’re with -- they’re just looking for a good read at a good price. I used to think I wasn’t legit until I was with some so-called legit publisher, but recently? I could give a rip. I’m doing my thing, I’m already happy enough, so whatever comes from that will come. Once I realized that, it was liberating.

It wasn’t necessarily a surprise, but it was nice to find out that if you get it out there and participate, readers will find you and get what you’re doing. I'm not talking about sales; mine are steady, though minor. A well-written reader review is the best thing.


What do you do to promote your books? Do you use social networking sites or other internet resources?
This is the big challenge. Marketing myself or my books doesn't come naturally to me. For e-books, there are only so many options. I try to keep it simple. I go on message boards for readers, do some price promotions and announce when Amazon discounts my titles. I have a website but it’s more to provide info; I don’t have time to blog. I’m on Facebook and Twitter of course, which is kind of like baby-blogging, but I don't do a lot of it. I like Goodreads for the conversation. It definitely feels more natural when I'm simply taking part in a conversation and not hawking my books too directly.

I probably spend as much time weighing what strategies don’t really pay off for the time and effort. Plus, I think it depends on the genres you’re in -- some currently lend themselves better to promotion than others. My books cross genres -- mystery, crime, historical, noir, espionage, war, humor -- and where the ideal readers are isn’t always clear, at least not to me. But that will come as more start e-reading.


Any tips or hints for authors considering bringing out their own self-published books?
Be patient and work on your writing. Especially for fiction. There’s an urge to get it out there now, and that’s hard to resist. Resist it! Especially if you’re new. It takes years of writing for most to become a pro. It chooses you, and it’s brutal actually doing it -- just you alone in a room plodding along. You have to love the writing and rewriting and the rewriting again and again. That’s where the best stuff comes out.


Do you read e-books? What about self-published e-books?
I read more e-books now than print books and don’t really miss the feel of a print book like I thought I would. I use the iPhone Kindle app mostly for reading and always have books with me. I should be reading more self-published books and intend to. I have a virtual stack of them but my to-be-read list is huge. From the ones I’ve read, I can see that there’s a huge spectrum of quality -- but then look at any books from big publishers and you see the same thing.


Who are your three (or four or five) favorite authors?
This is tough. Graham Greene, John Le Carré. Alan Furst for the historical detail. Charles McCarry for the craft. Elmore Leonard for the humor. Patricia Highsmith, Martin Cruz Smith, John Steinbeck, Kingsley Amis. That’s already too many, isn’t it? It’s often whoever I’m reading at the moment and like. Philip Kerr and Rebecca Cantrell recently. Okay, I'll stop.


What are you reading now?
I just finished a novel called Black Out by John Lawton, an American who lived in Britain for years. It’s set in wartime London, about a detective tracking down a murderer and mixing it up with Yanks, emigrés and the corrupt. He nails the British stuff but Americans too in a way only an American could. Right down my alley. Just started Crusader’s Cross by James Lee Burke, a writer who proves some of the best writers period are writing in the so-called genres.


What’s next? Are you working on your next book?
I’m going to put out The Losing Role as a print book. I’ve started drafting a new novel set in the current day, about a writer from Portland who turns FBI informant to investigate an estranged friend who’s leading a militia movement in rural Oregon. It’s based on a screenplay I wrote. It explores the changing Northwest and the urban-rural split. It’s a shift in direction for me, returning home so to speak. I’m enjoying it. Now, I just need to find the time for it.


How many books have you written? Do you have a favorite?
The PR never tells you that most so-called first-time authors wrote many manuscripts before that first novel is published. So, yeah, I’ve probably written about 6-7 total, a couple reworked into something else. My favorites are probably The Liberator, which is from my real first manuscript (started years ago as Reparation) and the one my agent’s trying to find a publisher for. I have a soft spot for Besserwisser: A Novel, because I tried something different by going with humor -- doing subtle funny and keeping it going was the hardest writing ever. 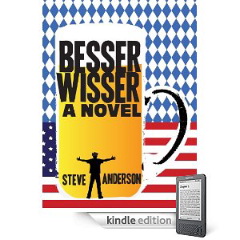 What is the best thing about being a writer?
There are so many things. Being my own boss, working at home, and connecting with readers, more recently. But it really goes back to creating stories that start to take on a life of their own. When you’re humming along, and you’ve put the work into shaping a character, and that character wants to do things -- has to do things -- through your fingers. That’s an amazing feeling. Not to sound spiritual (I’m definitely not that), but it’s like you’re channeling something, someone. Maybe the best thing is knowing what I want. This is what I do. I have to do it. It's a pain in the ass sometimes but it makes me feel alive.

Posted by Gilion at Rose City Reader at 9:16 AM 2 comments