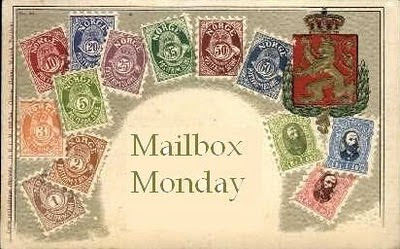 I have a long list for Mailbox Monday, even though only one came in the mail. This week, I am also participating in Story Siren's version, In My Mailbox, although I should have posted it on Sunday.

Rachelle, aka Bibliobabe, got me a review copy of her fantastic book journal. It is just the thing for a list-obsessed reader like me. Thanks Rachelle!

After our big trial win on Friday, I was ready to celebrate, which I did with a little book shopping spree at my favorite used bookstore, Second Glance Books.

Encyclopedia Prehistorica Dinosaurs: The Definitive Pop-Up by Robert Sabuda (I don't have kids and I have no real interest in dinasaurs, but I love creative books and this one is amazing)

Tales of Passion, Tales of Woe by Sandra Gulland (on my French Connection list, but the second in the trilogy, which means I have to find the other two)

The World of Jeeves by P. G. Wodehouse (an omnibus edition of all the Jeeves short stories -- thank goodness, because I am always losing track of which ones I've read)

If on a Winter's Night a Traveler by Italo Calvino (because it is one one of my lists, but I can't remember which one)

The Waterfall by Margaret Drabble (also on the Erica Jong list)

Journey to Portugal: In Pursuit of Portugal's History and Culture by Jose Saramago (in a nice hardback edition; I'm trying to read a book by all the Nobel Laureates)

The Message to the Planet by Iris Murdoch