Author of the Day: Anthony Powell 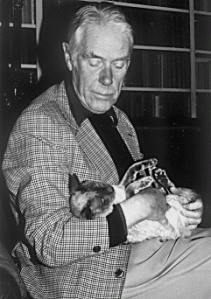 English author Anthony Powell (pronounced like "toll" not "towel") was born in 1905. He was educated at Eton and Balliol College, Oxford where he met several other young writers, including Evelyn Waugh and Graham Greene. Prior to World War II he worked in publishing and as a film-script writer, before becoming a full-time novelist and literary critic.

Powell is best known for his twelve-volume novel, A Dance to the Music of Time, most commonly available in a four-volume set with three novels in each. Dance is at the top of my "Top 10" favorite books list and what always name as my "desert island" book, although that may be cheating, since it is really 12 books.

Powell wrote a number of other novels and a biography of the seventeenth-century diarist John Aubrey. He was also a prolific literary critic and book reviewer for a number of periodicals including the Daily Telegraph, the Times Literary Supplement, Punch and the Spectator. He published four volumes of memoirs, three volumes of diaries, and two volumes of his selected literary criticism.

Powell was married to the author Lady Violet Pakenham. He died in 2000 at his home in Somerset.

His books are listed below in order of publication. Those I have read, including all of Dance, are in red. Those currently on my TBR shelf are in blue. I hope to read them all some day, although several are hard to find.

From a View to a Death

John Aubrey and His Friends

A Question of Upbringing (Dance to the Music of Time, Vol. 1)

John Aubrey and His Friends a New and Revised Edition

To Keep the Ball Rolling: Infants of the Spring (Memoirs, Vol. 1)

To Keep the Ball Rolling: Messengers of Day (Memoirs, Vol. 2)

To Keep the Ball Rolling: Faces In My Time (Memoirs, Vol. 3)

To Keep the Ball Rolling: The Strangers All Are Gone (Memoirs, Vol. 4)

O, How the Wheel Becomes It!

(If you would like your Powell-related blog posts listed here, please leave a comment with a link and I will add it.)

Posted by Gilion at Rose City Reader at 7:00 AM 5 comments