Review of the Day: Basil's Dream 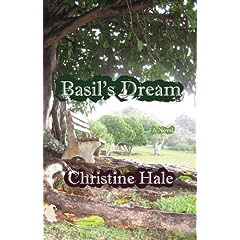 Basil’s Dream by Christine Hale has all the makings of a National Book Award winner. That is not to say that it is the most lively or approachable book around, but it has the necessary ingredients: an interesting hook, a complex plot, multi-dimensional characters in complicated relationships, big ideas with some moral ambiguity, and literary merit.

The hook is setting the story in Bermuda in the months shortly after 9/11, when the lack of American tourists and global insecurity wreaked havoc on the island’s economy. Racial tensions run high after the unsolved murders of two black men and an attack on a prominent member of the island’s British community. Labor strikes, arson, graft, and corruption are all painted into the backdrop of Hale’s story.

The complex plot centers on the Langston family – American ex-patriots taking advantage of the island’s lenient corporate policies. As cranky Darrell Langston struggles to get a new insurance company up and running, Lucy struggles to create a home for the family and salvage their marriage, and their 12-year-old son Peyton just struggles. Meanwhile, Marcus Passjohn, the liberal Opposition Leader and favorite son of the island’s black population, has lost his grip on the political situation, as well on his half-white son. Close to being framed for the unsolved murders, miserable over his inability to accomplish anything politically, and fed up with his trouble-making child, Marcus finds solace in his rapidly accelerating relationship with Lucy.

While not as thorny as the affair between Marcus and Lucy, none of the relationships among the characters are simple, as Hale weaves in island history, cultural variances, and racial identity. The characters are fully developed, and no one is all good or all bad. Even the hard-charging, self-centered Darrell is more than the stereotypical corporate husband who is such an ass that he deserves to be cheated on. Hale shows Darrell some sympathy, just as she does not shy away from the damage caused by Marcus and Lucy’s affair.

Hale tackles big topics like lingering racism, post-colonial politics, corporate globetrotting, child rearing, and adultery. Sometimes her ideas get a little muddled in nuance, the specifics lost in the overall atmosphere, but give her credit for aiming beyond simply an exciting plot. Lucy sums up the sort of ideas that both give the story depth and leave final conclusions vague:


We all tell ourselves stories about our lives . . . and the telling, so we think, makes them true. Our dreams are another story, and we call them lies. But dreams happen and life happens, both true stories while we’re inside them. More than one truth at the same time is paradox, and paradox, inhabited, transforms us. Always at all times there are as many truths as there are people living lives, as many dreams as dreamers.

Hale knows how to turn a phrase. But her book demonstrates more literary merit than merely elegant phrasing. She competently uses all the tools of a good writer – her characters speak with individualized voices, the dialog is realistic, not wooden, transitions are smooth, the overall pacing is appropriate, and the loose ends get tied. These details can be hurdles in a first novel, but Hale takes them effortlessly. It is the quality of workmanship as well as the complexity of the story that set Basil’s Dream apart. This is a first novel that deserves recognition.

(If you would like your review to be linked here, please leave a comment with your link and I will add it.)