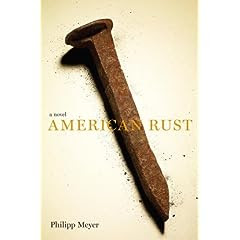 "Isaac's mother was dead five years but he hadn't stopped thinking about her." American Rust by Philipp Meyer. Interesting enough, if not a real grabber. In fact, this is my second try at starting this one. It has been sitting on my LibraryThing Early Reviewer list since January. I am going to buckle down and finish it. PS: I started two new books this week -- this one and The Last Chinese Chef by Nicole Mones. I usually have three books going at one time: one at home (Chinese Chef), one to carry around (Rust), and one audio book on my iPod (Shalimar the Clown this week). The carry around book is either a hardback without the dustjacket, or a paperback that I don't care it it gets beat up or that I put a protective cover on. I've followed this three-book system for so long, I hardly even recognize it as the fussy idiosyncrasy it is. Do other people have particular book habits? .