Review: The Size of the World 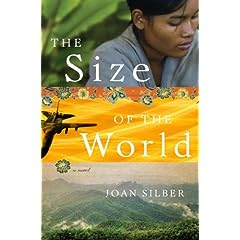 The Size of the World by Joan Silber is less a novel than a collection of loosely interconnected short stories – sort of a literary game of tag in which a character in one story has a connection with one, sometimes more, of the characters in the next story.  This structure is gimmicky, but clever. Ultimately, the stories come full circle when the hero of the final “chapter” sells the defective airplane screws that caused the problem that brought the hero of the first “chapter” to Vietnam to solve.

Silber’s writing is graceful and stories are interesting enough to pull a reader through to the end, but the book as a whole lacks depth. Several characters make adventurous choices to live and marry in foreign lands, but the short story structure does not give Silber room to examine the cross-cultural riffs she reveals.  Analysis of the relationships is thin.

Likewise, Silber’s bigger themes are nothing new.  The idea that, while the world may be a big place, people come together by personal connections, is intriguing if not startling.  But the premise that colonialism, corporations, and the military are heartless and bad is a pretty shop-worn formula.  All in all, there is not much to The Size of the World to keep a reader thinking after closing the back cover.

Posted by Gilion at Rose City Reader at 3:02 PM 3 comments