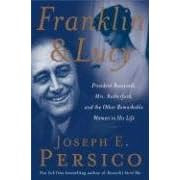 Franklin and Lucy is an intimate look into the personal life of Franklin Delano Roosevelt and the women close to him.

Joseph Persico examines the roles played by Roosevelt’s mother, wife, dearest lover, closest companion, daughter, and a cadre of others. While Persico occasionally makes assumptions based on no more than reasonable speculation, most of his conclusions are well-supported and persuasive.

The title is somewhat misleading in suggesting that the book focuses primarily on Lucy Mercer Rutherford, who became Franklin’s lover while working as Eleanor’s personal secretary during World War I, but then played only a peripheral role in his life until late in his third term as President.

Persico’s point seems to be that Lucy was Franklin’s true love. However, the same point could have been made about Missy LeHand, Franklin’s long-time secretary and best friend, who lived with him for decades. Although the timing is fuzzy, a case could be made that, had Franklin not discarded Missy when she suffered a series of mental and physical breakdowns, she, not Lucy, would have deserved top billing in the book’s title.

Just to describe this minor flaw in the book is to demonstrate its absorbing appeal. Persico keeps the tone personal rather than prurient, but the intimate details are thoroughly discussed. He shows Franklin’s domineering mother Sara using the family purse strings to direct Franklin’s life. He explores Eleanor’s complex relationship as simultaneous inspiration and aggravation, as well as describing her own personal intrigues as she led her parallel life as an international do-gooder. He considers Franklin’s lifelong appeal to women and his delight in their company, despite being crippled by polio.

Although designed to fit a niche in collection of FDR biographies, Franklin and Lucy provides enough context to provide a good introduction to the man’s life. The book is entertaining, thorough, and readable.

Posted by Gilion at Rose City Reader at 5:12 PM 0 comments