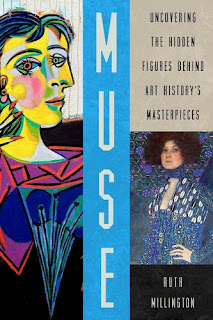 Ruth Millington is an art historian and author, specializing in modern and contemporary art. In Muse, she explores the stories of the people depicted in 30 famous portraits and the relationships they had with the artists who painted them. Millington challenges the idea that muses are young women who pose for old male artists. The muses in her book are women and men, young and old, and all play a more active role in inspiring and influencing the art they are a part of.

Millington writes in a breezy, journalistic style that makes her book approachable to readers who might be interested in but unfamiliar with the artists she examines. The only drawback to the book is that she describes a lot of works of art and there are no pictures or illustrations of them, other than one black and white sketch at the beginning of each chapter. This is understandable because the book would be enormous if it included pictures of all the art described. But be prepared to spend some time on google looking up the artwork as curiosity dictates, which it will.

The artists and the muses who inspired them featured in Millington's book are:

Muse is a fascinating look at the stories behind some of art history's most significant and recognizable master works. Artists and art lovers will be enlightened and entertained by Millington's new book.