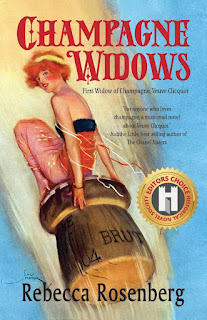 If you enjoy fact-based historical fiction with strong women protagonists, Champagne Widows is the book for you. Award-winning author Rebecca Rosenberg tells the story of the founding of the legendary champagne house, Veuve Clicquot, which started 250 years ago in Reims, France.

Barbe-Nicole Ponsardin inherited her wine making great-grandfather’s extraordinary sense of smell, referred to in the family as Le Nez, “The Nose.” Headstrong and beloved by her textile merchant father, Barbe-Nicole married her childhood sweetheart, François Clicquot, when she was 21 years old. François went into partnership with his champagne-making father and soon took over the company with Barbe-Nicole’s help. Rosenberg’s attention to historical detail about wine making and distribution brings the struggles of the young couple to life, with scenes of handmade bottles exploding in the summer heat and the excitement of hiring their first commercial salesman to sell the product throughout Europe, particularly in Russia.

But Champagne Widows is not François’s story. When he died only seven years after their wedding, Barbe-Nicole petitioned her father-in-law to allow her to take over the winery. A that time, the Napoleonic Code did not allow most women to own property in their own name or even work without permission from their husbands or fathers. Only widows were allowed to own their own businesses, so it was as Veuve (Widow) Clicquot that Barbe-Nicole planned to run the champagne house.

Rosenberg weaves an irresistible tale out of Barbe-Nicole’s business challenges and her romantic dilemmas. Her father-in-law did not make her takeover easy, apprenticing her to a stodgy winemaker with hidebound ideas about wine and lecherous ideas about the young Veuve. Once she finally gained control, she had to make and sell wine during the Napoleonic wars, in the face of navel blockades that paralyzed commercial shipping and a Russian ban on French products. Her closest sidekick was her loyal sales manager, who tempted her with more than a working relationship. But the Napoleonic Code would force her to turn over ownership of her winery to a new husband. Was marriage worth the loss of her business?

Champagne Widows is a page-turning delight of a novel and a sparkling tribute to "la grande dame de la Champagne."

Rebecca Rosenberg has written two prior historical fiction books about real-life women: The Secret Life of Mrs. London, about the friendship between the wives of Harry Houdini and Jack London, and Gold Digger: The Remarkable Baby Doe Tabor, about a woman who came to run a Colorado gold mine.