Monthly Wrap Up -- My November Books 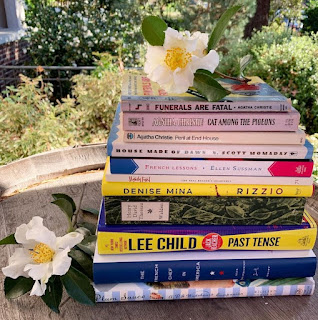 I got so caught up in Christmas prep that I forgot to post my monthly wrap up of the books I read in November. Doesn’t it feel like the last weeks of the year race by?  Between end-of-year work stuff and holiday festivities, I don’t know where my head is half the time.

I read 13 books in November, including four for Nonfiction November. I love these theme reads that seem more popular with the the boom of bookstagram.

In the order I read them, not the order they are in the picture:

The Incredulity of Father Brown by G.K. Chesterton. I’m working my way through all the stories. This one isn't in the picture at all because I read it with my ears. 🌹🌹🌹🌹

Funerals are Fatal by Agatha Christie, the first of three Christie books I read in November just because I was in the mood. 🌹🌹🌹🌹🌹

French Lessons by Ellen Sussman, one from my French Connections list and a fun trip to Paris! 🌹🌹🌹🌹

Rizzio, the new historical fiction novella by Denise Mina from Pegasus Books was an excellent way to spend a stormy afternoon. Great read! 🌹🌹🌹🌹🌹

Cat Among the Pigeons by Agatha Christie 🌹🌹🌹🌹

House Made of Dawn by N. Scott Momaday, which won the 1969 Pulitzer Prize. I wanted to like it more than I did, but the stream of consciousness, multiple narrators, and multiple narrative voices (including the always confusing second person) made it a difficult book to engage with. 🌹🌹🌹

Past Tense by Lee Child. I have one more to go before I finish all the Jack Reacher books written by Lee Child (without his brother as co-author). Fine with me. I was an ardent fan, but I’m off them.🌹🌹🌹🌹

Walden by Henry David Thoreau. I finally read this classic about living in the woods and can check it off my list! 🌹🌹🌹🌹

The French Chef in America: Julia Child's Second Act by Alex Prud'homme. If you want more of My Life in France, this is the book for you. I loved it.  🌹🌹🌹🌹🌹

March Violets by Philip Kerr. This is the first book in his Bernie Gunther series and I’ll definitely stick with it. 🌹🌹🌹🌹🌹

Plum Sauce: A P.G. Wodehouse Companion by Richard Usborne is a deep dive into Wodehouse’s 97 books. 🌹🌹🌹🌹

Also in the picture are the white camellias that bloom in my yard from November through Christmas.