The Real Hergé: The Inspiration Behind Tintin by Sian Lye -- BOOK REVIEW 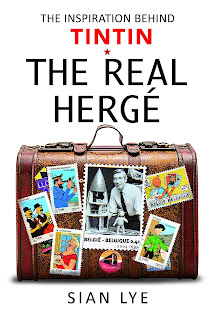 Hergé is the pen name of the famous Belgian cartoonist who brought Tintin to life. His 24 books chronicling The Adventures of Tintin have sold over 250 million copies and been translated into over 110 languages. But George Prosper Remi himself is a complicated figure. While celebrated as a beloved author – Belgium put him on a stamp in 2004 – his life involved a series of scandals, from marital infidelity to accusations of sexism, racism, and anti-Semitism, including possible collaboration with the Nazis during World War Two.

It is easy to hear about these shortcomings and think maybe Hergé should just be written off, his books no longer read. But is that the best course? The Tintin books bring joy. Isn’t it better to wrestle with Hergé’s flaws and see what we can learn from them, rather than deny readers the pleasure of his books? Wrestling with his flaws is just what journalist Sian Lye does in her new biography, The Real Hergé: The Inspiration Behind Tintin. Lye examines Hergé’s life with all the controversies that surround it. She also looks at the personal relationships and experiences that influenced his attitudes and his works.

Some of these earliest influences were his Catholic mother, who suffered from mental illness, and his involvement in Boy Scouts. Although his time in Scouting was tainted by sexual hazing among the boys and conduct by his Scoutmaster we would consider abusive today, Hergé loved the Scouts. The camping trips appealed to his sense of adventure and gave him an opportunity to travel and explore. This love of adventure inspired his Tintin stories. However, the cruelty of his Scoutmaster made Hergé hate authority and order, feelings he carried with him the rest of his life.

It was through Boy Scouts that Hergé had his first opportunity to publish his work. He began regularly submitting articles and illustrations to Le Boy-Scout, the official publication of the Belgian Catholic Scouts, when he was 15. This led to a job with a Catholic newspaper and, shortly after, his first Tintin book.

Lye’s analysis of Hergé’s life and work leads her to conclude that he was easily influenced by strong personalities around him. Often these “charismatic characters” as she calls them brought out his best work. But sometimes they led Hergé to make bad life and political decisions that haunted him. However, Hergé was willing to reconsider his past views and work. He took criticism to heart, just as he was swayed by other opinions. He often revised his books before they were reprinted.

It is certainly possible to enjoy the Tintin books without knowing Hergé. But they are more interesting after learning about this complex, sometimes frustrating, man. We can learn from him, even if we learn from his mistakes.