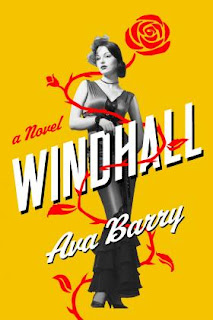 BOOK REVIEW: WINDHALL BY AVA BARRY
Ava Barry’s new novel Winhall brings the Golden Age of Hollywood back to life through a film noir lens. Eleanor Hayes was a rising star in the 1940s. As movie director Theodore Langley’s leading lady, she was the toast of the town. That is, until she was murdered during the filming of their last movie and her body discovered in the garden of Theo’s Hollywood mansion, Windhall. Theo was tried for her murder but let off on a technicality. He fled town, leaving Windhall empty and moldering.

Decades later, Eleanor’s murder is the hobbyhorse of investigative journalist Max Hailey, who thinks Theo was framed. When a young woman’s dead body is found near Windhall, wearing the same type of dress as Eleanor and killed in the same way, Max sees a story idea and an opportunity to investigate Theo’s innocence. Since the reclusive Theo has returned to L.A., the pieces fall into place for Max’s big chance.

The story is mostly set in present day. But Barry cleverly uses a journal of Theo’s to introduce scenes from the 1940s from Theo’s point of view. She used a different font for the diary entries, a font that looks a little like handwriting, which highlights the transition between the present day and historic storylines. The technique works well, especially when Theo describes making movies in Hollywood in the 1940s, as in passages like this:

When we need cowboys for a shoot, we drive over to Gower and Sunset, where all the unemployed cowboys hang out, waiting for work. They drift in from the desert between jobs wrangling cattle, because they know that film people pay a lot more money for a lot less work. The same goes for Indians and churchgoers, cops and priests – if you can’t find an actor to suit your needs, you drive around town looking for the real thing. He’ll turn up, sooner or later.

The technique works less well when, in several of the journal passages, Theo records entire scenes of dialog. This makes for a good novel, but an inauthentic diary. Maybe Theo could have written in an excuse like, “As is my habit with this diary, I’ll record the conversation exactly as I remember it. I may want to use it in a movie one day.” Or something to make the dialog passages less noticeable. But that is a quibble in an otherwise thoroughly enjoyable book.

Windhall by Ava Barry came out in March 2021 from Pegasus Books.