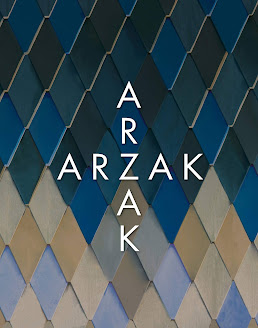 Restaurante Arzak in San Sebastian is legendary. The family eatery started in the same building over 120 years ago and the restaurant has had three Michelin stars since 1989.

I’ve never been to Spain, San Sebastian, or Arzak. But I am fascinated by San Sebastian and Restaurante Arzak since I watched an episode of Parts Unknown with Anthony Bourdain when he visits Arzak and tours San Sebastian with Juan Mari. Juan Mari is the third generation of chefs at his family's eponymous restaurant. His daughter Elena joined him 20 years ago and is poised to take over.

Arzak + Arzak is a gorgeous new book celebrating New Basque Cuisine, the Arzak family, and Restaurante Arzak. It tells the story of Juan Mari, who earned his first Michelin star in 1972. Juan Mari has been a cutting-edge chef since then, focusing on fresh, local ingredients in innovative, even avant garde presentations. He put San Sebastian on the map and inspired generations of young chefs. The book also follows Elena Arzak's career from her training in other famous kitchens to co-chef with her father as Restaurante Arzak looks to the future.

The first half of the book is narrative, broken into five chapters, set off by striking, behind-the-scenes, black and white photographs, most of them full page. The first chapter, "Arzak-Enea: A father, a daughter and a Basque restaurant," describes the building that has housed the restaurant since 1897 and describes a day in the life of Restaurante Arzak.

Chapter two, "The Dining Room: Juan Mari and the history or Arzak," describes Juan Mari's typical day at the restaurant and gives a biography of his fascinating career. Juan Mari was one of the founders of the New Basque Cuisine movement, which took root in the 1970s, around the same time Alice Waters pioneered a new "California cuisine" and Nouvelle Cuisine was taking off in France. He has always held onto the familiar flavors of Basque cooking, but with inventive twists.

The third chapter is called "The Laboratory: A recipe for creativity" and takes the readers inside El Laboratorio, the creative center of Arzak.  Part test kitchen, part science lab, it is here where Arzak comes up with more than 50 new dishes every year, to keep its cuisine evolving.

Chapter four, "The Chef's Table: The Extended Family," is my favorite chapter because it describes the beating heart of the restaurant – the big table nearest the open kitchen:

The long marble chef's table is, in effect, the control centre where the daily business of the restaurant is orchestrated and played out.

The staff eats breakfast at this table; family members like Elena's husband and two kids stop by for lunch; old friends, journalists, and visiting chefs linger here in the afternoon. It is also where Elena and Juan Mari hold meetings with purveyors, their sommelier, and staff. But in the evening, the Chef's Table is set for guests because it is the most requested table in the house.

The last of the narrative chapters is "The Kitchen: Elena Arzak and the future." Elena has gradually taken over from her father as she worked with him over the past 20 years. Not yet 50, the future of Arzak is in her talented hands. This chapter gives her culinary biography and vision for the restaurant. 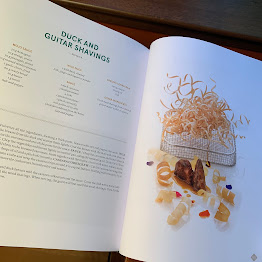 The recipe section is gorgeous and certainly beguiling, even if daunting to all but the most ambitious of home chefs. Each of the 64 recipes is accompanied by a dramatic color photo, most of them full page. While extraordinarily complicated, reading the recipes drives home what Arzak is all about. The laborious effort that goes into each dish is extraordinary, which is why Restaurante Arzak exists and keeps its three stars year in and year out.

For those diners lucky enough to enjoy Arzak in person, the Arzak + Arzak book would be a perfect keepsake. Even for readers like me who have never been there, the story of Arzak and its father/daughter chefs is absorbing. It is exciting to learn about running a famous restaurant with a history tied so deeply to a particular region.

Arzak + Arzak now has pride of place in my Cookbook Library, even if I will never cook any of the recipes from it. I'll probably display it as a coffee table book instead - it's beautiful enough.