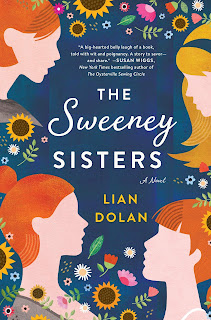 Lian Dolan's new novel, The Sweeney Sisters, met me right where I want to be. It was exactly the book I wanted to read to take my mind off current events. Some people are reading thrillers or romance books for distraction these days, others like dense classics or self-improvement. This family drama with a literary theme and a comic touch was just what I needed.

The story starts with the death of Bill Sweeny, author, literary icon, and father of three grown daughters, Liza, Maggie, and Tricia. Only, it turns out he has a fourth daughter, Serena Tucker, who only learned of her connection to the Sweeney family when she did a DNA test. Apparently Bill Sweeny and his Southport, Connecticut neighbor Birdie Tucker were closer than anyone knew.

The plot unfolds from there. In the tradition of all good Aga Sagas, there's lots of domestic conflict, with ex-boyfriends, bad husbands, skeletons in closets, secret relationships, misunderstandings galore, hurt feelings, blow ups, make ups, and lots and lots of shared meals. Eventually, every problem gets sorted and couple gets paired, and everyone sits down to a big Thanksgiving dinner. There's nothing wrong with following a tried and true recipe to make something good. The key is in the details, and Lian Dolan gets all the details right with The Sweeney Sisters; the setting, characters, and tone are spot on.

Much of the story takes place at the family home, called Willow Lane, a well-worn, five-bedroom house from the 1930s on three acres of Southport waterfront, with a dock and a boathouse Bill Sweeney used for his writer's retreat. The sisters' mother Maeve, who died of cancer 15 years before the story starts, described the house as "Shabby and chic before Shabby Chic was chic." The house is itself a character in the story, and Willow Lane's relationship with toney, buttoned-down Southport is a metaphor for the Sweeney family.

Bill Sweeney appears in the book only in retrospect but is the catalyst for all of it. He was a writer of the old school, the last of his generation. I imagined him as a cross between John Updike and Norman Mailer. Nolan describes him like this:


He was a throwback, to the time when being a vaunted American writer meant being male, white, and heterosexual, with a drinking problem, a healthy ego, and a dark childhood. That model of the testosterone-driven man of letters was dying off, fading away like the curriculum it spawned with reading lists of Hemingway, Fitzgerald, Faulkner, Styron, Roth, Vonnegut, Cheever, Irving. The academic world was opening up to a diversity of voices and life experiences. William Sweeney, the tail end of the manliest (so they thought) generation, managed to hold on longer than most.

His death, at age 76, and the surprise revelation that he had an unacknowledged daughter, forces the three Sweeney sisters to evaluate their relationships with their father and each other, and his relationship with their mother. They also have to decide how the fourth Sweeney sister fits into the mix, something Serena has a say in as well.

The four sisters have their own stories that Nolan blends together well. Liza is the eldest of the three, most rocked by learning she has an older sister. She runs and art gallery in Southport, is married, has twins, and manages everything perfectly, until she doesn't. Maggie is the middle of the three, an artist with a family reputation for not living up to her potential. Tricia is the youngest by six years, perhaps the most affected by their mother's death when she was still a teen. She is a hard-driven attorney, "always thinking strategically before emotionally," which causes much of the conflict in the story. Serena is a journalist, curious about, and envious of, the connection between the three sisters she grew up next door to without knowing. Dolan, who hosts the popular and long-running Satellite Sisters talk show with her own sisters, knows how to write authentic sister relationships.

If you wrote a review of this book and want to me to list it here with a link, please leave a comment below.