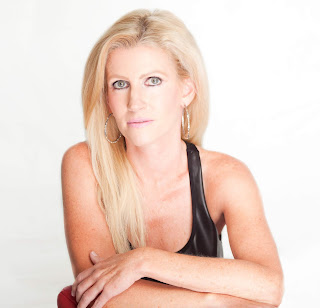 Karen Stefano is a lawyer and author. Her new memoir, What a Body Remembers: A Memoir of Sexual Assault and Its Aftermath, examines the lasting effects of trauma. Stefano was assaulted in college, went on to become a criminal defense attorney, and 30 years later was hit with anxiety and PTSD that she talks about in her book. 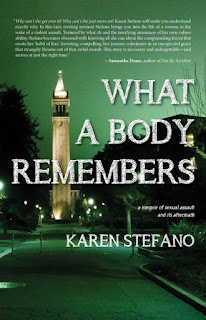 Karen recently talked with Rose City Reader about her new book and the importance of talking about sexual assault.

How did you come to write What a Body Remembers?

Before writing my story, before my telling, I first spent two years doubting. Sure, this assault and its aftermath felt interesting to me, but did it matter to others? Who was I to presume anyone else in the world would care? As I eventually shared with more and more women what this might-be-book was about, I can’t count how many said, “Yeah, something like that happened to me too.” And they shared their own story and that simple act of sharing unburdened them somewhat—at least that’s what I like to believe. This was before the #MeToo movement and I began to wonder, could my story be emblematic of something bigger? I finally realized I had to write this book because it’s important to speak out, to let others know they’re not alone, to let everyone know there are many ways to heal.

As my publisher and I wrapped up the final editorial process I was struck with a moment of panic: Did I really want this out in the world? Did I really want the whole world to see the ugliest, most humiliating parts of me and my life? But by sharing our stories we render ourselves vulnerable, and I believe there’s a lot of personal power in that kind of vulnerability.

Although you were the victim of sexual assault in college, you went on to become a criminal defense attorney, defending people accused of very violent crimes. Did you question the paradox of being a crime victim and a criminal defender?

This is something I address directly in the book, within the full context of all of my life experiences, and when you read my story the rationale for this paradox becomes clear. It was an unexpected path and one I wouldn’t change. I will never apologize for spending eight years of my legal career defending the rights of the poorest, most damaged, most under-privileged in our society—and those were 99% of my clients.

And frankly, it’s a large part of what makes my story so interesting. The victim who goes on to become a prosecutor—that’s expected—that’s not interesting. The victim who suffers a brutal assault, who works in law enforcement, who goes on to defend persons accused of crimes, who is good at it, who sees the humanity even in her clients who have committed atrocious violent acts, who finds her own voice in doing this work—that’s a journey worth reading about. And as readers will learn from the book, I have seen the criminal justice system from virtually every aspect imaginable: law enforcement employee, extern for a federal judge, law clerk for the prosecution, criminal defense lawyer –and once, nearly as a defendant. Fortunately a badass criminal defense attorney came to my rescue after the police violated my constitutional rights. —But wait. I’m giving too much away.

No, it never entered my mind, actually. I felt the true story stood on its own, with all of its twists and turns and paradoxes and its raw honest examination of we humans and all our flaws and contradictions. I hope that readers agree!

Anyone who has been the victim of a sexual assault or has known someone who has been assaulted. Anyone who has a fascination with “true crime” or our criminal justice system, anyone interested in the paradoxes of our lives. As I stated above, I want readers to know there are many ways to heal from trauma, that it’s not always a straightforward trajectory, but rather a two steps forward, four steps back process for most of us. And I want them to know that’s okay. And I want them to know they’re not alone.

Can you recommend any other memoirs that deal with sexual assault and recovery from trauma?

I absolutely loved Alice Sebold’s memoir, Lucky. And, while it’s not a memoir, I believe everyone on the planet should read the Stanford Rape Victim’s letter to her assailant, Brock Turner. It’s so raw and honest and well written and I personally identified with it because, like her, as a nineteen-year-old victim of sexual assault, one of the most bewildering experiences was the crash course I received on our criminal justice system. Like her, the whole experience could have been so much less terrifying and traumatizing if someone would have simply taken the time to explain to me what the hell was going on.

Well of course, the biggest surprise was what I learned about my assailant 30-years post assault. I won’t give any spoilers to the book, but that was nothing less than life altering.

I read everything. Literary journals, newspapers, poetry, essays, memoir, short fiction, and novels. And I’m usually reading four or so books at a time, picking up whatever suits my mood at the moment. Right now I’m reading Sue William Silverman’s stunning new poetry collection entitled If the Girl Never Learns. The girl in these poems is damaged, she’s a survivor, and she’s an absolute badass. I’m about to finish Yiyun Li’s novel Where Reasons End, which has taken me awhile because it’s so intense (though beautiful) that I’ve had to digest it in smaller chunks. Read it and you’ll see what I mean. And now I’ve just started the novel Self-Portrait With Boy by Rachel Lyon with whom I had the pleasure of reading at the Sunday Salon NYC this past May.

Tons! The early reception for this book (it only officially released June 11) has been so heartwarming and I am so grateful to everyone who is helping this book find its way out into the world. I’ll be doing readings in various cities including Los Angeles, Washington, DC, Denver, and Minneapolis. I’ll also be on several podcasts and radio shows and will be doing several written interviews in various literary journals and book blogs like Rose City Reader. The best place to keep tabs on what I’m doing in terms of promotion is my web site, or by following me on Twitter (handle is @kstefano1), or the hash tag on Twitter: #WhatABodyRemembers. I’m also on Facebook and am always grateful to hear from readers.

Back in 2008 I was at the Squaw Valley Community of Writers workshop and I found myself talking to one of my literary idols, the writer Janet Fitch (whose White Oleander I have read at LEAST a dozen times). I was whining about something and she rolled her eyes (she is known as a tough teacher) and told me. “Just write.” And as simple (and perhaps dismissive) as that directive was, it has stayed with me, and when I am having trouble writing I almost hear her voice in my mind. I am also a huge fan of the Anne Lamott mantra favoring “shitty first drafts.” I simply try to get words down on the page. Then I go back and edit, edit, edit, generating literally hundreds of drafts—be it a chapter, an essay, or a short story. I suspect it’s extremely inefficient but it’s the only way I know how to write.

Any tips or hints for authors considering writing a memoir?

An important thing to understand is that writing about events from your own life isn’t easier than writing fiction—it’s harder. You are faced with the challenge of transforming your trauma into art. You’re giving voice to personal terror, perhaps describing a time of life where you had no words to articulate what you were experiencing—but you’re forcing yourself to find those words now. You are stirring up personal demons but in doing so, you’re forced to hold yourself accountable, to confront the ugliest places inside yourself, then wrestle that self onto the page. You have to do research, have to endure the loneliness and self-isolation of writing, have to pay attention to craft. You’re putting your own life into scene, with a plot, pacing, dialogue, and beats of movement inside that dialogue. Most importantly, you have to be brutally honest and that honesty requires digging deep inside your own humanity, your own frailty, your own flaws. These confrontations require an obscene amount of courage.

I’m currently at work on my next book, a novel this time—the novel I back-burnered in 2013 to start What A Body Remembers. My rationale at the time: I’m only writing about things that actually happened, so it’ll be effortless! This book will practically write itself! Memoirists have it so easy compared to fiction writers! I’ll be finished in four months! Ha. Talk about self-delusion! In addition, I will continue sharing my stories in the form of essays and short fiction. As I said above, by sharing our stories we render ourselves vulnerable, and I believe there’s a lot of personal power in that kind of vulnerability.

WHAT A BODY REMEMBERS IS AVAILABLE ONLINE, OR ASK YOUR LOCAL BOOK SELLER TO ORDER IT.