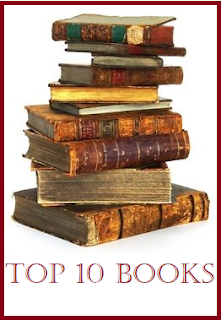 I don't usually do a Top Ten favorites list for the year, but I'm in the mood. What were your favorite books that you read in 2018?

My personal favorites for 2018 were mostly fiction, a couple of nonfiction, and, as usual, a lot of older stuff. Here's my list, in alphabetical order by the author's last name:

Eating People is Wrong by Malcolm Bradbury (1959), because of the title (natch) and because I love campus novels.

Diary of a Provincial Lady by E. M. Delafield (1930). This faux diary was so funny I immediately bought the sequels.

Suicide of the West: How the Rebirth of Tribalism, Populism, Nationalism, and Identity Politics is Destroying American Democracy by Jonah Goldberg (2018), because he can make me think and laugh about serious subjects.

Eleanor Oliphant Is Completely Fine by Gail Honeyman (2017), because it is wonderful, especially the audiobook.

Shylock Is My Name by Howard Jacobson (2016), which I thought was a brilliant retelling of The Merchant of Venice.

Crazy Rich Asians by Kevin Kwan (2013), not because of the bling and the silly product placement, but because it gave me my first understanding of how unrelated and independent Asia is to the West.

The Towers of Trebizond by Rose MacAuley (1956). A very funny novel about a young woman and her aunt traveling through Turkey, that also has a serious side as the young woman struggles with her conscience and her faith.

H is For Hawk by Helen Macdonald (2014), because I get now why people like it even though it is about a bird.

A Gentleman in Moscow by Amor Towles (2016), for all the reasons everyone loves it.

Gertrude and Claudius by John Updike (2000). This was a surprise. It's the story of Hamlet's mother and her love affair with Claudius, his uncle and the murderer of his father, leading up to the moment the Shakespeare play opens. It is terrific.