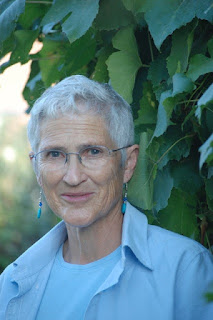 Bette Lynch Husted is a poet and essayist who just wrote her first novel, All Coyote's Children, a compelling story set in northeastern Oregon.

PORTLAND EVENT: The book launch of for All Coyote's Children is this Monday, June 11, 2018, at 7:00 pm, at Broadway Books. Bette will be there to read from her book and sign copies.

Bette recently talked with Rose City Reader about her new novel, writing, and her own favorite books.

How did you come to write All Coyote’s Children?

In 2007, wondering if I could step from creative nonfiction and poetry into fiction, I took a Fishtrap workshop from Molly Gloss, and at the end of the week she said, “Bette, you have to write a novel. Get started, now.”

The story takes place in in northeastern Oregon, on and around the Umatilla Indian Reservation. What drew you to this location for the setting of your novel?

I spent some time researching local history and spinning my wheels, trying to find a way into the story I wanted to tell. In some ways this book was born at a June wedding a year after that workshop when I heard a Umatilla spiritual leader say, “We’re not just joining two people here today. We’re joining two families.” My son, wearing a ribbon shirt and moccasins, looked as happy as I’ve ever seen him; the bead and shell wedding veil he was lifting from his bride’s head was one he had made especially for her. His own heritage is mainly Celtic and Northern European; the bride, who is Umatilla-Cayuse and Apache, was a former student and my own longtime friend.

I knew this marriage wasn’t the answer to the question that has troubled me all my life—the story most Americans don’t talk about because, as one of the characters in All Coyote’s Children puts it, “it cancels all our mythologies. No wonder we can’t face it.” (How do any of us face the fact that the indigenous peoples and cultures of North America were dehumanized, seen as obstacles to be eliminated as others “tamed a continent” -- a phrase used by our president in his recent Naval Academy graduation address -- and then all but erased from national consciousness?) But it was a joyful day, and the spiritual leader’s words felt extraordinarily generous. That day, healing -- and a story about healing -- seemed possible.

I studied literature because I wanted to be a writer. This was before M.F.A. programs, or at least any that I knew about. For years, teaching high school and then community college literature and writing took most of my time and energy. But it fed me as a writer, too. Teaching Oregon /Northwest Literature and Native American Literature courses, as well as an expanded-canon American Lit. class -- and learning to guide students deeper and deeper into their own writing -- were gifts.

You are known for your poetry and essays. What was it like to write your first novel?

As a young writer, I imagined being able to say, “I’m working on a novel.” A real writer could do that, I thought. Even after I believed I was a “real” writer, I wondered if I could write a sustained work of fiction. But discovering these characters, and watching them move through their lives, was as close as I have ever come to experiencing magic. I wrote much of the novel in the community room of our public library, a space I shared with and homeless people trying to stay warm or escape the eastern Oregon heat. Away from phone and dog and my own loved ones, I could enter the world of the novel and live there for a few hours. As I pulled into a parking space I always wondered, what will they do today? They always told me.

And I was “working on a novel.” It was a joy. I almost didn’t want it to end.

In inland Northwest Native cultures, Creator chooses Coyote to prepare the world for human beings. He’s comic, too -- making the same kinds of goofy and appetite-driven mistakes we humans make. (“I was engrossed to the exclusion of thinking,” he says in Archie Phinney’s translation of the Nez Perce creation story, his excuse for forgetting to save the piece of the Swallowing Monster that will become the Nez Perce. Not to worry: they will spring up from the blood-soaked earth.) And Coyote is resilient. A survivor, in spite of himself. Ranchers have waged all-out war on coyotes for years, but a few years ago I read that there are now more coyotes in America today than there were in 1492.

“We’re all in this together,” characters in All Coyote’s Children realize. That’s what the title means to me. Coyote still has much to teach us if we pay attention.

Please tell us a little about the poem fragment from William Orr at the beginning of your book and why you chose it: “To see the world and say it true / Means starting with loss. / But that’s not what the heart wants, / That’s not where the saying stops.”

The novel begins after great loss, devastating losses for the Cayuse culture (half of their number dead less than 20 years after the arrival of the Whitmans, and decades of intentional cultural attack in government boarding schools) and on a smaller, more personal scale, a good non-Native family suddenly devastated by unexpected separation and grief. To be honest, we have to acknowledge loss. But the heart wants more, the heart wants not only survival but a healing story. “We are still here,” Native people say. “We will never fade.”

Molly Gloss has been a writing mentor, a guide as well as a friend. I loved her work long before I met her. I was fortunate to be in a writing group with her and with Ursula K. Le Guin, and I can hear both voices in my head as I revise. Leslie Silko’s Ceremony -- what need I say? It’s an amazing book.

I read fiction, creative non-fiction (sometimes just non-fiction) and poetry. We have been inviting Northwest writers to the First Draft Writers’ Series [in Pendleton, Oregon] for five years, so every month I get to read writers I admire. And just now I’m reading Kevin Young’s Brown, Tracy K. Smith’s Wade in the Water, and Ursula’s Always Coming Home, as well as the manuscript of Molly’s forthcoming collection of short stories. (Lucky me!) And I recently finished Jesmyn Ward’s Sing, Unburied, Sing.

Last month I watched the trailer of Arwen Curry’s forthcoming documentary Worlds of Ursula K. Le Guin and heard Ursula say, “To learn to make something well can take your whole life. And it’s worth it.”

One last gift, I thought. And the best writing advice any of us could ever receive.

After the launch at Broadway Books on June 11, I’ll be:

I hope to be working on another novel soon. And in the writing workshop group I mentioned, we each write and critique two poems each month, so I have quite a file to sort and revise, so I’m hoping for another poetry collection. I write a monthly column, “From Here to Anywhere,” for the East Oregonian, so I’m writing something nearly every day.

ALL COYOTE'S CHILDREN IS AVAILABLE AT BROADWAY BOOKS, POWELL'S, AND AMAZON, OR ASK YOUR LOCAL BOOK SELLER TO ORDER IT!