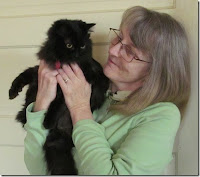 Mollie recently answered questions for Rose City Reader about her latest book, the series, writing, and her own favorite authors and books:

You just released the third book in your Crazy Cat Lady Mystery Series, Cat’s Paw. How did you get the idea for such a fun series?

The hero of my series Lynley Cannon and I have a lot of things in common. Being a cat lady is one of them. Others include being sixty(ish), volunteering at a cat shelter, and living in an old house in the Hawthorne district of Portland.

This third book finds your sleuth volunteering at an animal sanctuary in the San Juan Islands. Why did you decide to change up the location?

Living in the beautiful Pacific Northwest, I wanted Lynley to get out and see the sights. The large and prestigious Colverleaf Animal Sanctuary is modeled after Best Friends in Utah but since it’s fiction, I moved it locally. Only the first part of the story takes place at Cloverleaf. After a double homicide at the sanctuary, Lynley runs home to Portland but murder follows in her wake.

The titles of all your books are funny feline puns: Cat's Eyes, Copy Cats, and now Cat’s Paw. How do you come up with your titles?

Titles just come to me. In some cases, the book evolves from the title, as with Cat Call, the next in the series (to be out this fall). “Call” in film terminology refers to times and locations of filming, and Cat Call takes place on a television shoot where Lynley has assumed a cat-handling job for an injured friend.

What do you admire most about your heroine, cat shelter volunteer and amateur sleuth Lynley Cannon?

Lynley is tough. She’s not afraid to get out of her comfort zone. She can admit when she’s made a mistake. She has a good relationship with her family. Most of all, though, I admire her dedication to her cat shelter volunteering, donating many hours a week to needy cats.

What is her least endearing trait?

Now there is an interesting question. I had to think, but I would say Lynley’s least endearing trait is that she’s a bit of a know-it-all.

Do you know right away, or have an idea, how you are going to end your stories? Or do the endings come to you as you are in the process of writing?

I usually don’t know exactly where the story will end when I begin writing the book. I have a ghost of an outline, but often the story unfolds in its own direction once I get started.

What is your background? How did it lead you to writing a mystery series featuring a “crazy cat lady” as your sleuth?

I grew up in Portland and went to a private school where I learned grammar, punctuation, word usage, etc. My writing was encouraged both at school by a forward-thinking teacher and at home by an artistic mommy. I wrote my first cat mystery in 4th grade. After a forty-year intermission, I came back to it as naturally as a cat to catnip.

What have you learned from writing your Crazy Cat Lady Mysteries – either about the subject of the books or the writing process – that most surprised you?

I still am in awe of how much I love writing. When I sit down at the computer, or even a notebook and a pen, time goes away. Nothing else in my life comes close. I’ve also learned a lot about cats through my research for the books.

Yes. My grandmother who lived with us had been a librarian and owned a large collection of children’s books, everything from Winnie the Pooh to Peter Pan. Both she and my mother read to me every day, and I strove to learn to read for myself from early on.

Lilian Jackson Braun, the mother of the cat mystery, was the biggest influence on my own cat writing. Shirley Rousseau Murphy’s Joe Grey Mystery series are a favorite as well, though her cats are more mystical than mine.

Louise Penny’s Chief Inspector Gamache series are, to my mind, brilliant. I can’t wait to read a new one when it comes out.

Fit Cat, non-fiction by Arden Moore; The Cats that Told a Fortune (The Cats That #3)
by Karen Anne Golden; Violent Crimes by Phillip Margolin; The Cold Dish (Walt Longmire, #1)
by Craig Johnson.

Playing around in my mind. I’m never bored.

I write best in the morning, so I get up early and begin whatever project I’m working on. When I have a foster cat, I will write in his room with him, otherwise I’m on the couch in the living room with my ancient laptop. In the afternoon, I move on to emails, social media, and dreaded chore of publicity.

Speaking of, do you have any events coming up to promote Cat’s Paw?

Later this month, I will be attending the Cat Writers’ Association annual conference in Myrtle Beach, South Carolina, and as a professional member of the association, I will be promoting all three of my cat mysteries there. This is my first time at the conference and I am very excited to meet and mingle with fellow cat writers.

The next in the series, Cat Call, will be out this fall. “When a friend suffers a bizarre accident, Lynley takes over her job as cat handler for a television pilot, only to find a mysterious 'hex' has been sabotaging the set with deadly intent.”

I just finished the first draft of number five, Cat Café: “A body is found in the cat café, and all the black cats are missing.”

CAT'S PAW AND MOLLIE'S OTHER CRAZY CAT LADY MYSTERIES ARE AVAILABLE ONLINE IN PAPERBACK OR KINDLE, OR ASK YOUR LOCAL BOOKSELLER TO ORDER THEM.