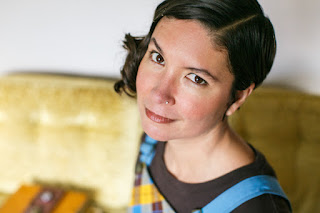 Susan DeFreitas was born in Michigan, lived in Arizona, then moved to Portland, where she now writes realistic fiction and sci-fi. Her debut novel, Hot Season, has generated plenty of high praise in book circles. She's one to keep an eye on!

Susan recently answered questions for Rose City Reader. You can also listen to a long interview of Susan on Between the Covers.


How did you come to write Hot Season?

I wrote the stories that would become the chapters of this novel during the course of my MFA at Pacific University. I had just moved to Portland from Prescott, Arizona, where I had lived for the past fourteen years, and I suppose these stories were portraits of people and places and experiences from that time in my life I wanted both to pay homage to and make sense of.

I began writing fiction as soon as I was old enough to read it. My first stories were mysteries—by the time I was in junior high, it was fantasy and science fiction. But I had an English teacher who insisted I write realist fiction in his class. I thought it was snobbish at the time, and I still do, but it did lead to me to attending a boarding school, in my senior year of high school, for the arts.

I took a break in my study of creative writing between undergrad and graduate school—during which wrote for magazines, directed an arts nonprofit, and wrote marketing copy—but I was always working on a novel. In my early thirties, I decided to go back to school for fiction.

Hot season in central AZ is not quite summer. It comes on with a vengeance around the end of April and tends to hit its apex right around the Fourth of July. That’s when the monsoons begin, and the rain cuts down on both the danger of wildfire and the heat.

But in those parched two months leading up to the monsoons, there’s a hallucinatory quality to the heat, as well as a real sense of danger. I found it an apt metaphor for the paranoia around government surveillance in this novel, as well as the sparks of attraction that fly between its characters. Hot season is also the time of year when much of the novel is set.

How closely does the plot of Hot Season hew to the real events that inspired the story?

The outlaw activist around whom much of the plot revolves is based on a real person, Bill Rogers, who was part of a group of radical activists based out of Eugene, Oregon, in the nineties, which was responsible for some of the largest acts of so-called terrorism in US history, totaling $45 million in damages. Like the character Dyson in the book, Bill was a graduate of Prescott College, my alma mater, and he, like Dyson, did establish an activist center that was raided by the FBI.

There are also some characters and circumstances based on the time when I owned a house in the barrio of Prescott and rented rooms to college students, all of them younger women. But that’s where the similarities end; in many ways, the book is an imagined version of their lives, as I graduated college in 2000, before the era when the novel is set.

Because these chapters started off as short stories, my process with this novel was a little different than is typical. The story that would become the title chapter—the final chapter of the book—was probably the third or fourth piece I wrote in grad school, in my first semester. I had the feel of it, the swing and sound of it, the aesthetic and the images, before I really had any idea what the story was about.

To get that—i.e., who these characters were, what they were doing together, and what these events were, in fact, the resolution of—I had to go back and discover the bones of the book, the plot. I had to develop the arcs and the through lines, the threads of connection that would converge there. But did I always know that piece was the ending? Absolutely.

Hot Season has been compared to another college novel, Donna Tartt’s The Secret History. The eco-sabotage storyline is reminiscent of Jim Harrison’s A Good Day to Die. How do you feel about these kinds of literary comparisons?

Donna Tartt is brilliant, so any comparison to her is welcome. =) And I do think the comparison to The Secret History holds, in that college is a time, I believe, when we’re both really smart and really dumb—a time when a philosophy or idea or commitment can get ahold of you in a way that may define, for better or worse, the rest of your life.

I’m also happy you brought up Jim Harrison, as I am a native of the Great Lakes State. But in contrast to A Good Day to Die—and that other rollicking, wisecracking classic of eco-sabotage, The Monkey Wrench Gang—this is a novel first and foremost about women, young women in particular. As such, it’s not so much about high-stakes heroics as it is about the being willing to dedicate your life and career, early on, to incremental changes in culture and society that you may not even live to see. That, to me is real courage, and it’s completely unglamorous. Megan Burbank noted in her review of the book in the Portland Mercury, that Hot Season “depict[s] social agitation as, really, what it is: a gradual, infuriating, complex effort performed by smart, dedicated, flawed humans to varying degrees of commitment and success.” I really consider that the essence of what I’m getting at here.

I learned how to build a novel out of linked stories. Not just linked stories billed as a novel (increasingly fashionable these days) but a novel with real arcs, real stakes, and resolutions. For me as a writer, that often means looking at the end of the story and determining what needs to be set up in the beginning.

As an author, I’m influenced by all sorts of authors, and my favorites include Ursula K. Le Guin, Denis Johnson, and Lydia Millet. But this particular book was most directly influenced by Ed Abbey and John Nichols, as well as the punk writer Aaron Cometbus.

I write both realist fiction and speculative fiction, so my tastes are all over the map. But right now I’m really enjoying the work of an author who’s new to me, Laura Pritchett—her latest novel, The Blue Hour, set in small-town Colorado, is just a dream. I’m also enjoying revisiting the weirdness of Stranger Things Happen by Kelly Link.

I’m a big fan of Jane Friedman, so I knew, long before I signed the contract for my first book, that I needed to own the domain associated with my name. I also used to work as a journalist and blogger, so I know how important it is to ensure that all the info these time-strapped folks need to cover us can easily be found in one place. That’s why I have all of my press materials—as well as links to all of my reviews and interviews—online at susandefreitas.com.

As for my Facebook and Twitter pages, I consider them not just a place to share my own news and views but links to articles of interest and to the work of other authors I love. That kind of literary citizenship interests me more than “look at me!” all the time (though I do think there’s a thrill for readers in sharing the writer’s journey). As for how important social media is—how else would anyone know about me or what I’m doing? Unless they happened to find me in person? In this day and age, social media is the marketplace of ideas, the big town square where we gather to discuss the issues of the day. Though it has its vagaries, I can’t imagine not wanting to be part of that discussion.

Yes! In fact, I have a bit of a Northwest mini-tour set up for April, both as an author and an editor. Here are my upcoming dates (click links for details):

Upcoming events can be found on the home page of my website.

Right now, I’m working on a series of speculative short stories with a strong sense of place in the three states I’ve called home—Michigan, Arizona, and Oregon—called Dream Studies, a project that’s being supported by my Patreon subscribers. I’m also preparing to dig back into the next novel in the series that begins with Hot Season, which is called World’s Smallest Parade.

HOT SEASON IS AVAILABLE ON LINE,
OR ASK YOU LOCAL BOOKSELLER TO ORDER IT!