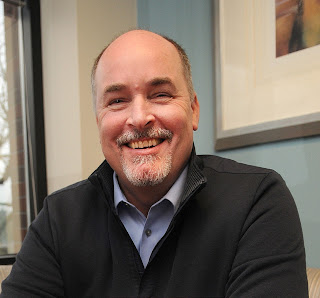 M. Louis is the author of a new mystery series featuring Portland private eye Jake Brand. The series started with a Twitter exercise that lead to the first published book, Angel's Devil, followed by the second book, Secondhand Smoke. 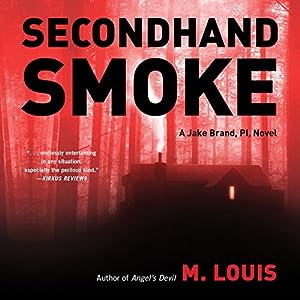 How did you come to write Secondhand Smoke?

A friend suggested that my CPA firm would benefit through social media engagement, so I tried Twitter. After a few weeks I decided it wasn’t for me. In fact, I decided I could gain a larger following tweeting nonsense rather then tax law. So I decided to tweet a novel. I chose the concept of Jake Brand and after a week I found myself trapped in the plot. I decided I needed to be more formal with process in order to extend the story in a logical fashion. I started thinking about process and decided that if I was going to go the extreme of structure I might as well write a novel.

Secondhand Smoke is the second book in a series. When you wrote your first Jake Brand book, Angel’s Devil, did you have a series in mind?

Actually, Secondhand Smoke was the first book I wrote. Angels Devil, while published first, was the second book I wrote. My thought at the time was that AD would be a shorter book that could be a giveaway promotion. AD ended up being close to a full novel simply because I was having fun with the story.

My original goal was to complete a novel. When completed, my goal became publishing the book. Then my goal was to sell at least one copy. I didn't think of a series until the rough draft of SS was close to complete. This decision influenced the ending of SS.

What is your professional background? How did it lead you to writing your Jake Brand series?

I'm a CPA and own a public accounting company. I do a fair amount of writing and communicating on complex topics with a goal of simplifying and supporting my opinion in a clear ordered manner. There is a fair amount of creative thinking in my business, and constant communication with varied people. I think there's a discipline that helps with writing.

What do you admire most about Jake Brand? What is his least endearing trait?

I think Jake is humble and empathetic, most of the time. He's smart, strong, skilled but dosen't assume that the person confronting him isn't similarly smart strong and skilled. A little self doubt is a good way to be safe.

Jake makes bad decisions in his romantic life. He likes women who aren't good for him and is struggling to even define what he's looking for in a love interest.

Did you know right away, or have an idea, how you were going to end the story in Secondhand Smoke? Or did it come to you as you were in the process of writing?

I had no idea where the story was going. As much as I thought I wanted formal structure, the draft became the vehicle for that structure. After a few weeks the story started to write itself. At night I'd dream a chapter that I'd write down in the morning. I knew I wanted him to struggle with romance and I wanted there to be mystery and tension in his personal life not just his professional.

What did you learn from writing Secondhand Smoke – either about the subject of the book or the writing process – that most surprised you?

I think the greatest lesson for me was identifying when my humor is inappropriate. It's okay to be inappropriate, to a degree, if it advances a character or a plot line, but not as a stand alone cheap moment.

I also learned that a well presented end product is dependent on a talented team. From editor to social media, the process is best completed with talented engaged professionals along the way.

James Clavell, Stephen King, Tom Clancy, Colleen McCollough, Dr. Seuss, Robert Louis Stevenson, Wilbur Smith, Patrick O'Brien, James Fenimore Cooper: These are the artists who have inspired my love of books. They transport me. Their prose is so finely crafted that its seamless.

The genesis of Jake Brand though is old detective tv shows like Moonlighting, The Rockford Files, and Magnum PI.

This is an interesting question because to me every book is a mystery. The mystery may be guessing where the author is headed or why, but there's always engagement in what's going to happen next. My very first experience with a mystery series was the Nancy Drew series. My grandma had a beach house in Arch Cape and I'd stay up late with a flashlight reading. In the dark, at the coast, sleeping in a musty, cold attic, with stormy weather outside, was an amazing back drop to the books.

Books were huge. They allowed me to escape mentally during tough times and inspired my curiosity.

I am reading John LeCarre who wrote several best selling spy novels that have been converted into movies and tv. His style is dramatically different then mine. He spends massive amounts of time developing the mental state of his characters. In the end it works brilliantly.

I'm on Twitter, Instagram, and my website so I use tweets, pictures, videos -- lots of social media. I try to create a human side to M. Louis and not focus just on selling. I've given books away to local charities. I private labeled wine - Angel's Devil, big boys don't cry, but they do wine. And obtaining reviews and interviews.

We released the audio versions of both books this year. No other events scheduled

You have to love the process because you are probably going to struggle to make money at writing. The competition is fierce, the delivery systems keep most of the money, and ultimately, making money has as much or more to do with marketing as it does quality.

I love it when a reader reacts to what I've written. For example, everyone seems to have an opinion on where Jake’s love life should go. And they can be quite adamant in their feelings.

I also love it when I write something really good. And I think there are at least pieces where I've surprised myself with what I think is very high quality.

And I love the challenge of doing it better.

Keeping it short allows me to data dump what I've been thinking about.

Doing it everyday keeps me engaged in the story.

What’s next? Are you working on your next Jake Brand book?

I am working on book three. The rough draft is about 80% done. It will be different. The first two books are 100% first person Jake. Book three will present from multiple perspectives.

Writing a book is like baking a cake. It takes time, patience and the right combination of ingredients. And no cake works without butter. In a book, the butter is the writer's essence. Without pieces of the writer blended into the thoughts and feelings of the characters, the story will be flat and one dimensional. Too much and it will be self indulgent.

ANGEL'S DEVIL AND SECONDHAND SMOKE ARE AVAILABLE ONLINE OR ASK YOUR LOCAL BOOKSELLER TO ORDER THEM!